Kamel Mennour is pleased to present Mohamed Bourouissa second solo exhibition at the
gallery.
Mohamed Bourouissa describes contemporary society implicitly, by its contours. With a
critical take on the mass media image, the subjects of his photographs and videos are
people left behind at the crossroads of integration and exclusion. In the photographic
series ‘Périphérique’, he presents the daily life of young men from the Paris suburbs,
taking his inspiration from history paintings. However, he breaks with his polished
aesthetic in two videos: ‘Temps mort’ [Dead time] a personal exchange with a prisoner
via mobile telephone; and ‘Légende’, in which sellers of counterfeit cigarettes, whom he has equipped with hidden cameras, film their activity. More recently, with ‘L’Utopie d’August Sander’ [The Utopia of August Sander], a project carried out in Marseille and Gennevilliers, he immersed himself in the world of job seekers. He asked them to become a monument, creating a statue of them with the help of 3D printers.
For his second solo exhibition at galerie kamel mennour, Mohamed Bourouissa tackles the theme of money. Entitled ‘All-in’ – a title borrowed from a video created as part of Nuit Blanche [a Parisian art festival] for the Paris Mint, filmed in the reception rooms of its Quai Conti headquarters in Paris and the factory at Pessac where euro coins are minted. Put together in the style of a music video, the work is accompanied by the song ‘Foetus’ by Booba, one of the key figures in French rap. Its tempo is also dictated by the different stages of the making of a coin bearing the rapper’s effigy, and finishes with the coins being poured onto the detritus of a party. The video, a one-off collaboration between the institution and one of the faces of urban counter-culture, refers, according to Mohamed Bourouissa’s own terms, to a ‘liberal anarchism’, where individual success is measured by money, in a paradigm of western societies.
The images of the factory at Pessac introduce the representation of power into
Mohamed Bourouissa’s work, albeit in a cryptic way. They constitute the nodal point of a juxtaposition of relationships with money on which the exhibition is based. A perfect example is the mobile ‘Un poids deux measures’ [One weight, two measures], the result of a collaboration with the artist David Hominal. Two images, hanging from the ends of a revolving arm, face each other. Alternating with the coldness of a photograph of a minting machine, and forming a visual pun, is an image of a potato [patate is French slang for 1000 Francs], painted in brown tones with large, deliberately crude brushstrokes. A variant of the popular expression ‘deux poids, deux mesures’ [meaning ‘double standards’], the title is significant, emphasising that the value of money is relative. In the adjoining room, the two photographs on display, ‘Stock 1’ and ‘Agnès’, re-enact the violence of this duality. The panoramic and monumental view of the stocks of money at the Pessac factory, from which all human presence is banished, is met head-on by the portrait of a young woman, poorly dressed, counting her money in an outdated interior.
In the video ‘La valeur du produit’ [The value of the product] stands a man wearing a
suit and tie, leaning on a desk. He is closely framed; his face is not visible. He explains the ins and outs of his business, the selling of organic products. We quickly realise that he is talking about illicit trade as a means of bringing in ‘wheat’ [French slang for money].His strategy – selling a quality product at the right price, finding the balance between offer and demand – is common to all commercial activity.
Mohamed Bourouissa does not pretend to deal with the immense and complex
network that binds us to money. First and foremost, he seeks to emphasise its
attractiveness and its power as a motor and model of integration and success, but also, in a significant dichotomy, the force and violence of its capacity to exclude. With the token bearing the effigy of Booba, sold for two euros during Nuit Blanche, encased here in a metal plate and made rarer by a limited edition, he does not exempt art from this dilemma. Managing to avoid the pitfalls of the moral disapproval that often accompany this taboo subject, he has drawn up a host of situations that leave us with the sense that something much wider is being expressed. 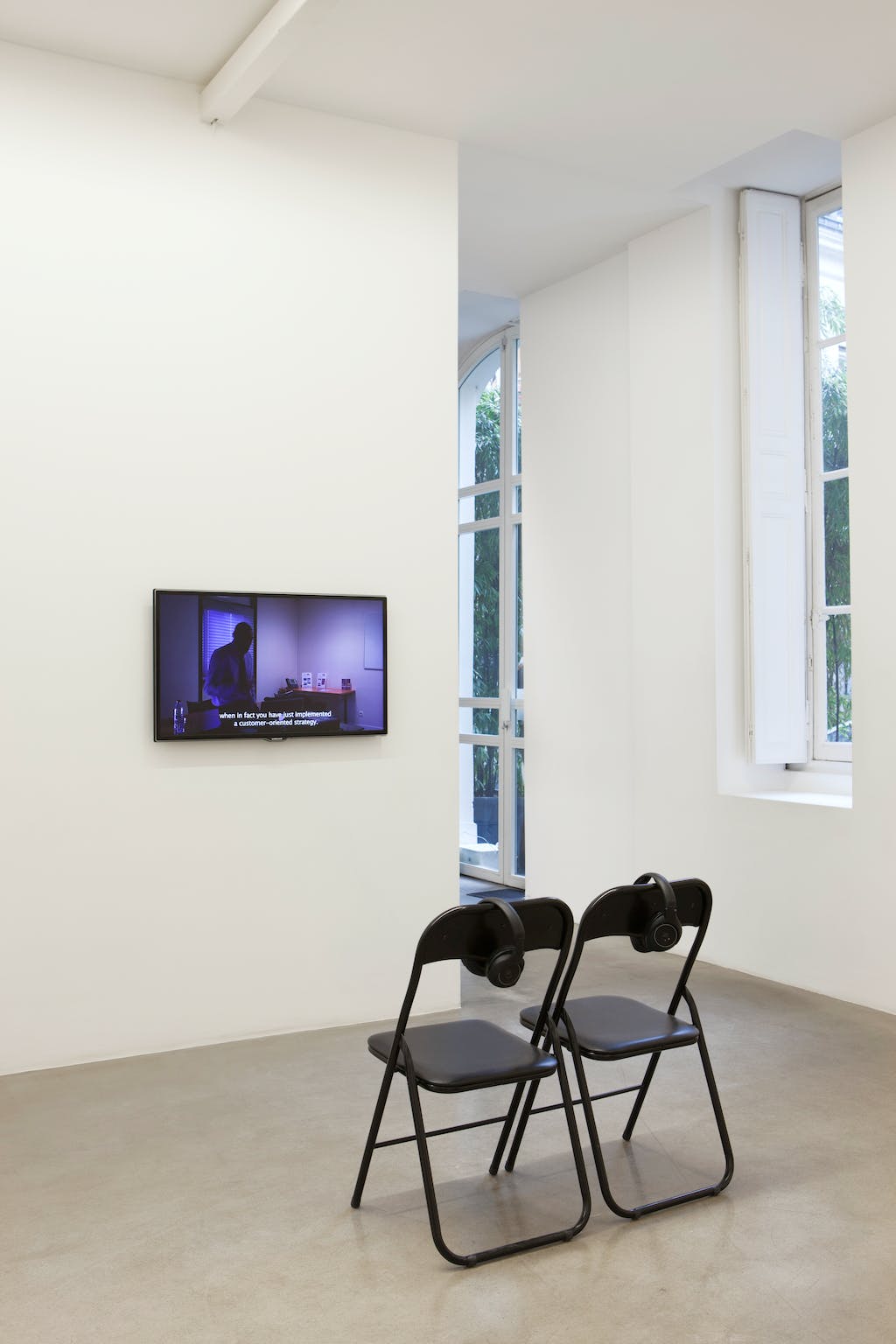 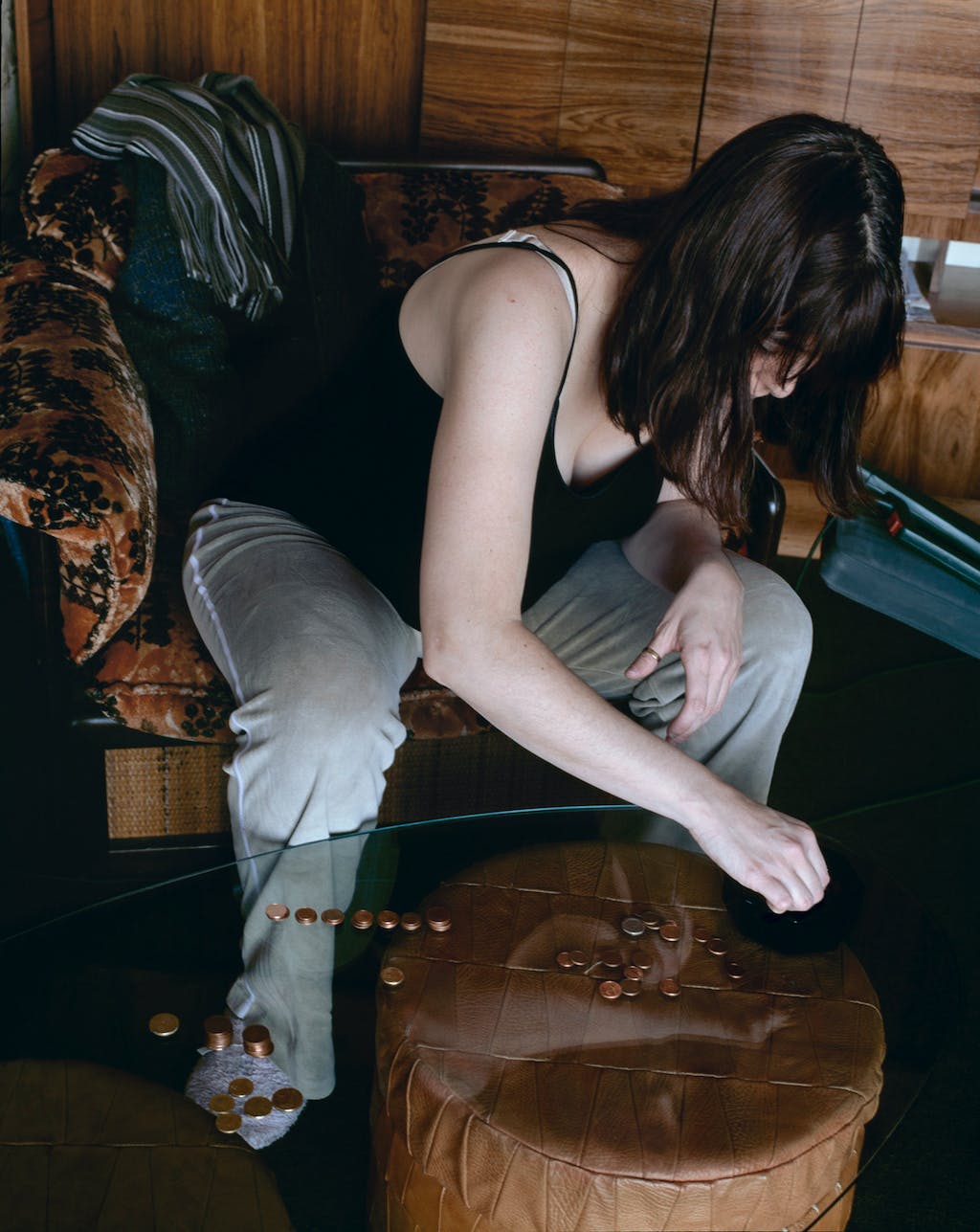 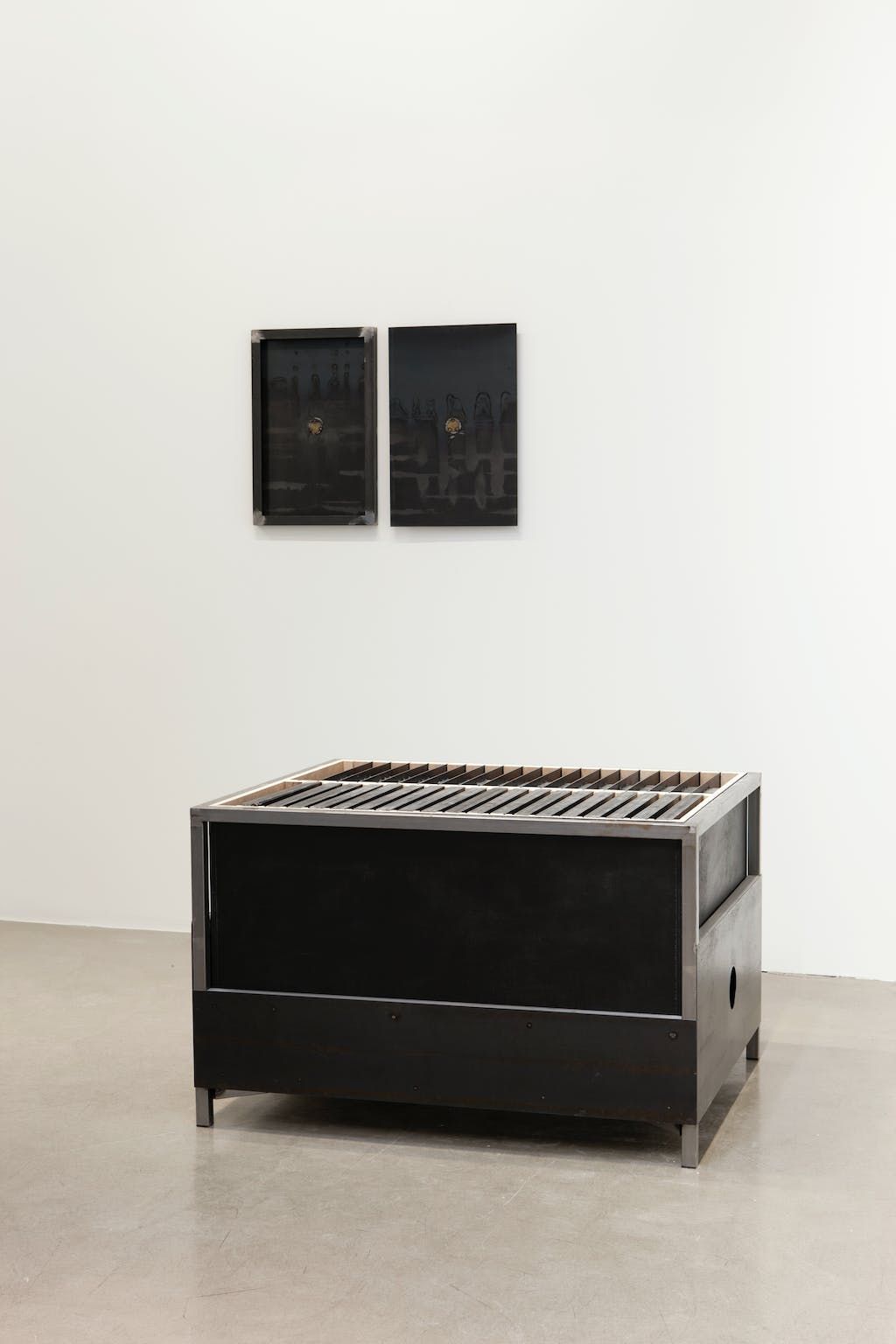 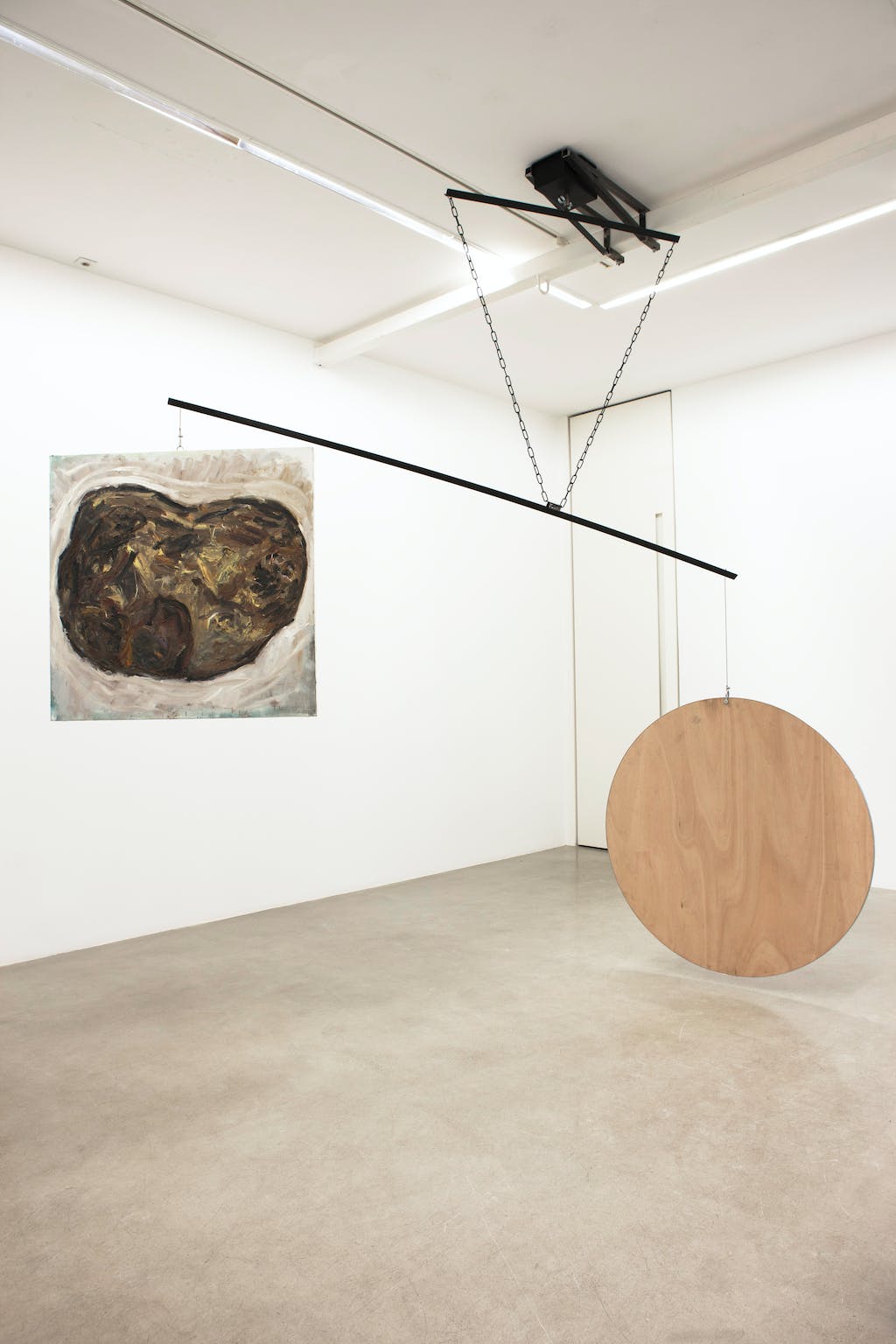 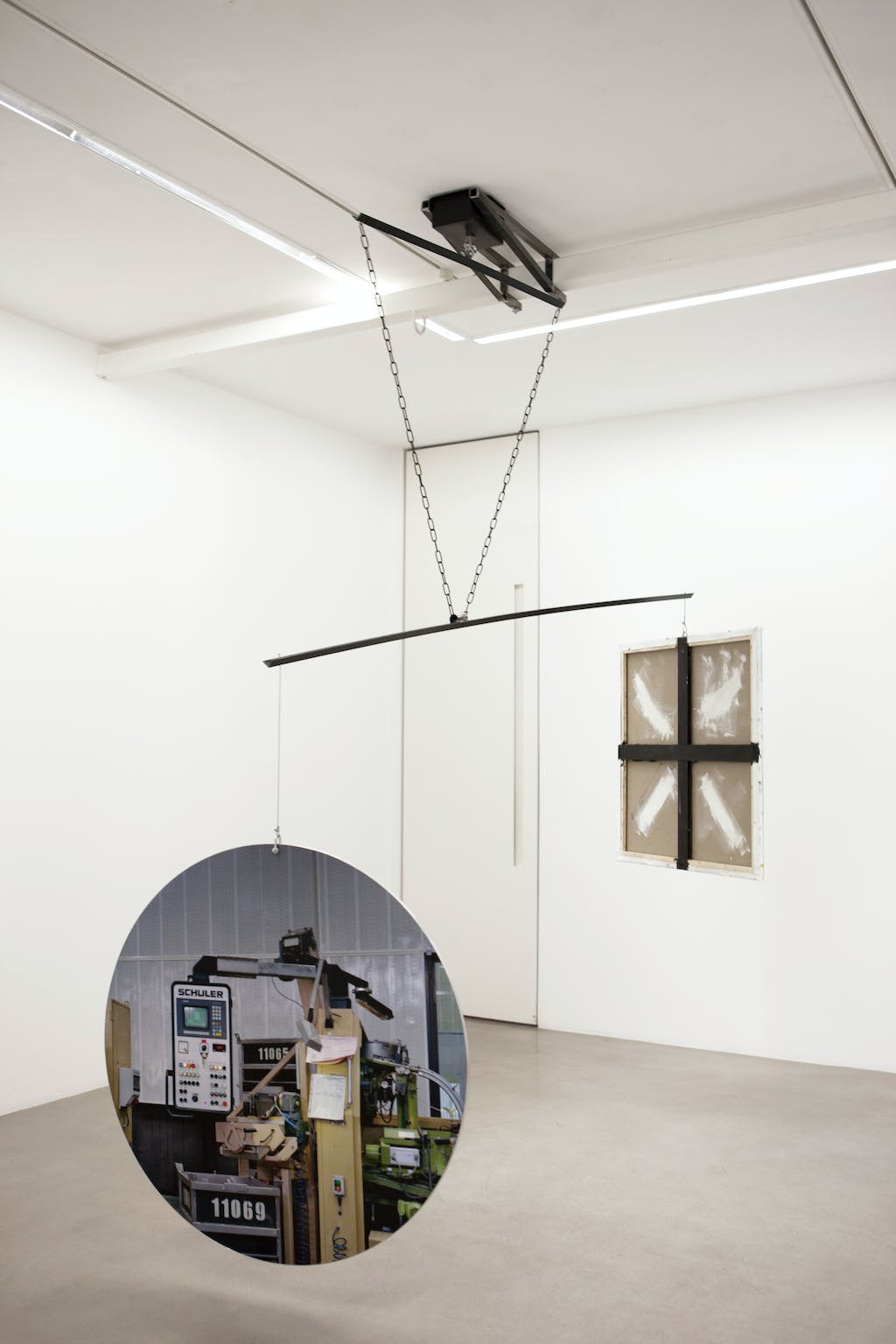 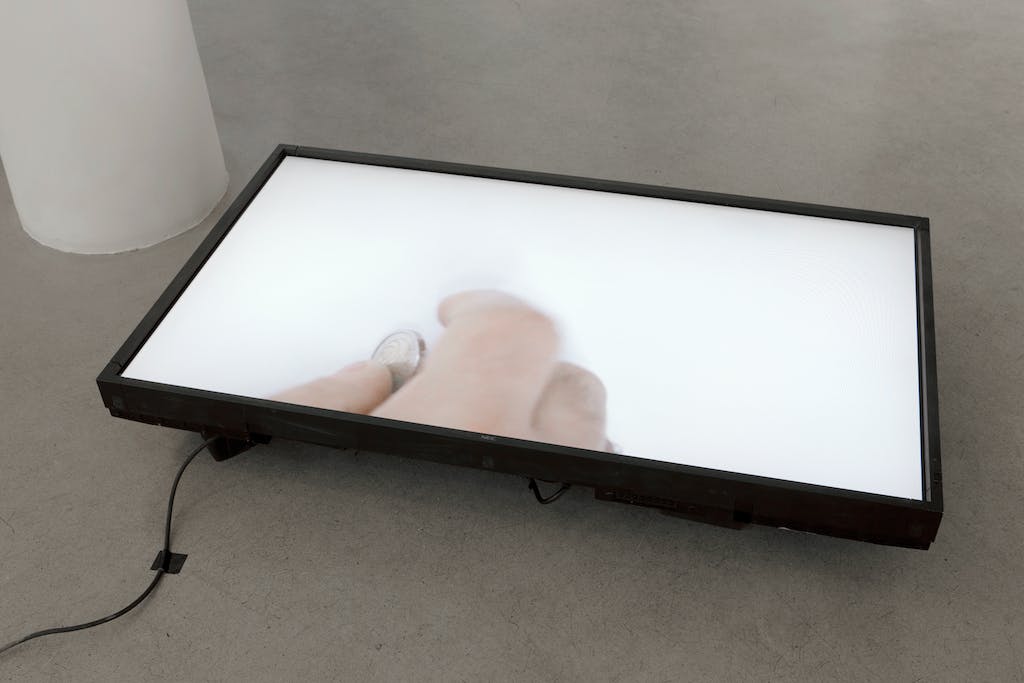 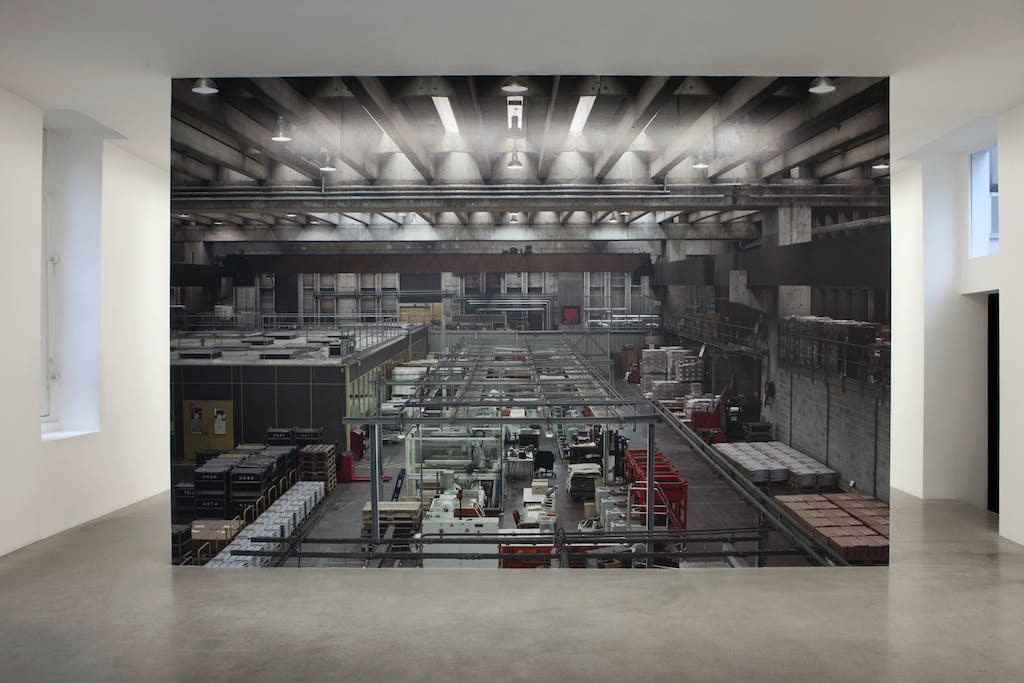 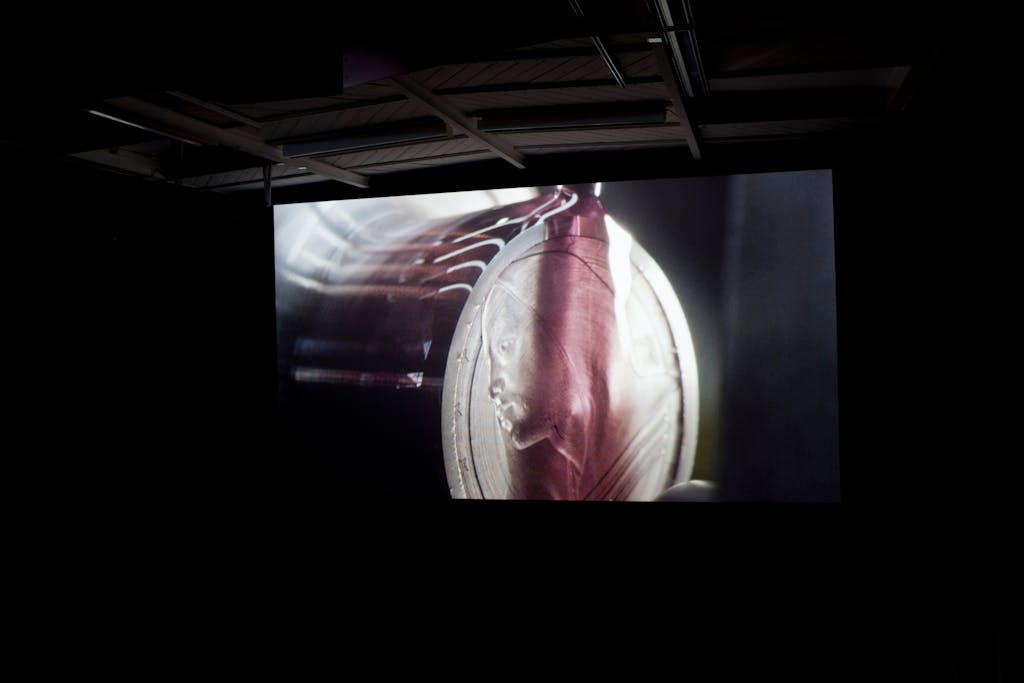 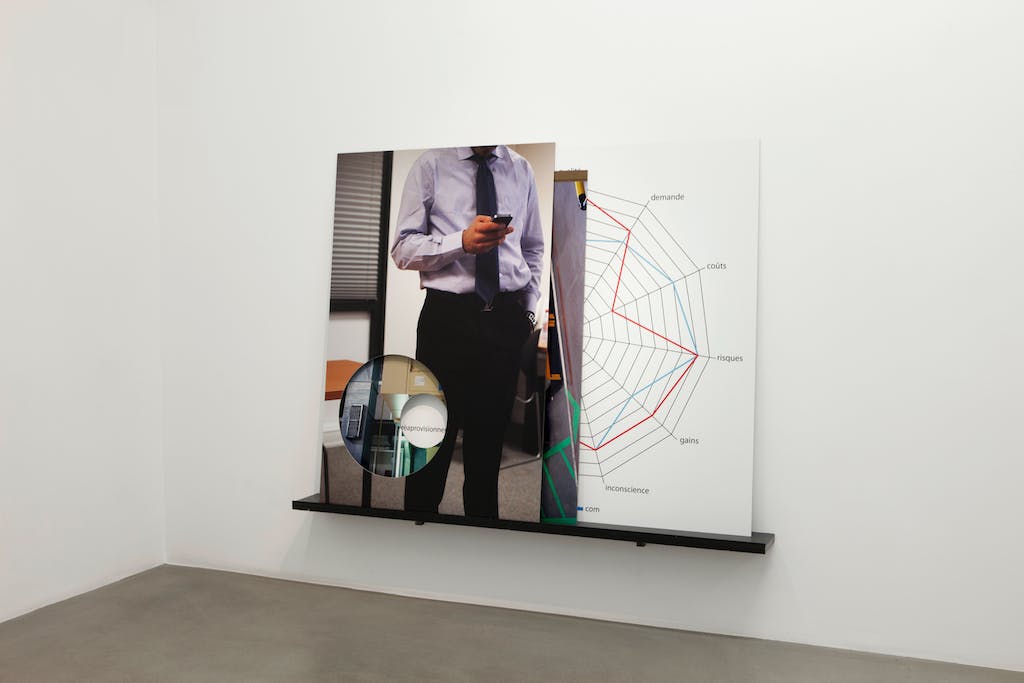