Here is the noise of the world turning, business as usual. Here is light fighting the vice of
habit. Here is spirit hindered by too much obviousness. Claude Lévêque invites us into
‘Vies de Singes’ [Monkeys’ Lives], his third solo show at galerie kamel mennour, where he
has created a contemporary allegory with vocabulary drawn from a personal mythology
made up of childhood objects, sounds, unsteady calligraphy and shadows thrown against
the wall. ‘Regarde-les rire’ [Look at them laugh], the neon phrase in the trembling
handwriting of Romaric Etienne, stands at the entrance to the exhibit. It forms the
frontispiece of a fictional device where the senses are called upon to philosophise: your
eyes will see the laughter, your ears will stammer the sound and your toes will listen, as
Nietzsche’s Zarathustra promised.[1]
At the bottom of the gallery stairs, blackness invades. The covered skylight extends its
cavernous darkness over thirteen children’s playgrounds made of raw metal. The
playgrounds, each the same size, are suspended, swaying around a central bulb that emits
its questioning light waves and throws the shadows of the bars of the play equipment in
carceral shapes against the walls. The playgrounds are set moving by the visitors to the
exhibit, as they make their way through the device. A passage made all the tighter by the
tension in the air caused by an asphyxiated voice. Its life breath fails, struggles for air but
finds nothing but anguish, a strangling alienation. Statistics and standards end up in the
impasse of agitation, despair, and war. But the work is there, interpreting. It lets you see
and hear the closed exits of pathological normalcy. The hindrances to childlikeness.
At the crossroads between the intimate and the social, ‘Vies de singes’ holds up a mirror
to the contemporary world. Unleashing the truth, art can open up the possibility to
choose. Claude Lévêque seems to be calling for a regeneration such as one once heard
from Joseph Beuys : the ‘concept of freedom expresses the fact that no longer is
everything done for people by others ; but rather that it is human beings who must now
act out of their own freedom and responsibility.’[2] And so, break their chains. ‘Le Grand
Soir’ [having now also taken on connotations associated with ‘the big night’ in English, le
Grand Soir is originally an expression from the French workers’ movement, and refers to
the revolution that will topple capitalism, T.N.] is the title of Lévêque’s in
situ intervention for the French pavilion at the 53rd Venice Biennale in 2009. A cage,
bars, light bulbs, sequins, the sound of a ship and a black silk flag provoked an
electroshock. Be seized, it said—in order to pull oneself together. Lévêque, influence by
the body art of Gina Pane, provokes senses, energy, and dignity. His colour palette, from
the most pastel tones to the most violent, stir up moments of lucidity and flashes of
lightning, sweetness and panic. As with this light bulb suspended over the slats of a
childhood bed [‘Sans Titre (le Trou dans la tête),’ 1986 ; Untitled (the Hole in the Head)],
or this revolving light transforming the shadows cast by the cage of a shopping trolley
into a gigantic prison raised at the heart of the Leclerc cultural centres in Pau and Tarbes
[‘Sans Titre (Caddie)’, 1990 ; ‘Untitled (Caddie)].
For more than thirty years, across the world and at multiple sites, Claude Lévêque has
been constructing an oeuvre without compromise. His commitment as a visual artist once
made itself felt in the rue du Pont de Lodi in Paris, at the current site before it became
the galerie kammel mennour. At the time is was called galerie de Paris. Lévêque had
conceived of a sort of pigsty, with a central trough, stalls and straps [‘Sans Titre’, 1991].
The visitor was required to go down on hands and knees in order to get through the
doorway, lowered for the occasion to pig height. Already, Lévêque was exhibiting the
narrowness of battery-raised human life. Nothing has improved since… Like Chardin
painting his ‘Painter monkey’ in 1739, Claude Lévêque sounds the alarm, exposing the
tragi-comedy of the human carnival. Not in order to overwhelm but rather to provoke
the laughter of the Grand Soir, a liberatory laughter. 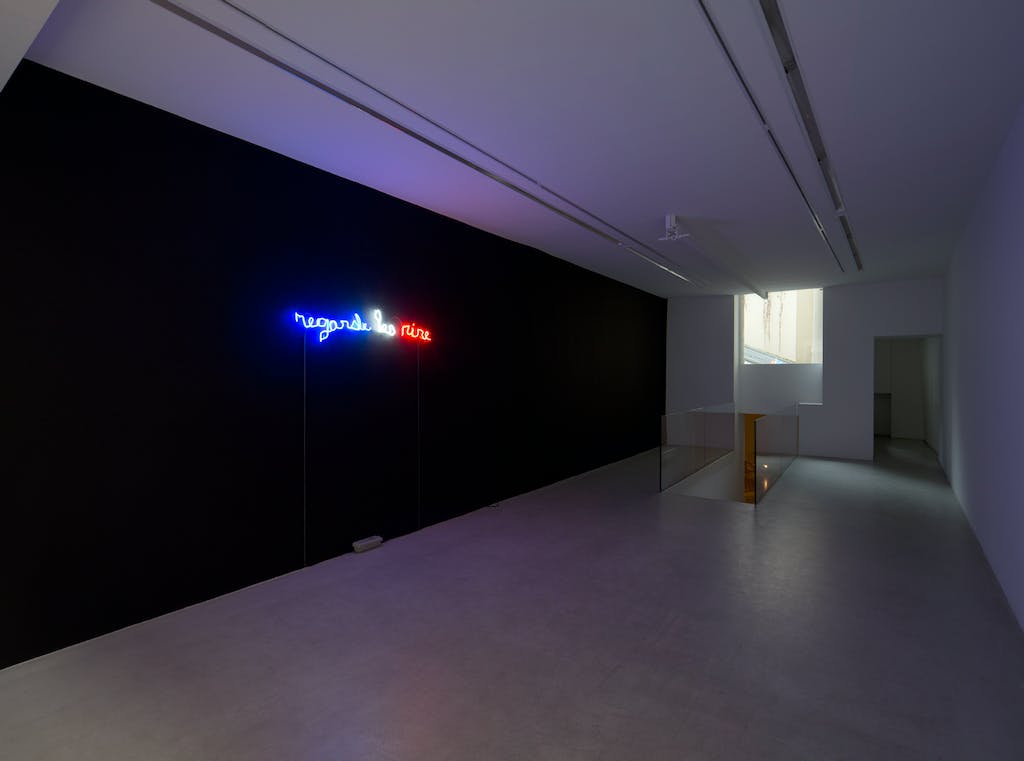 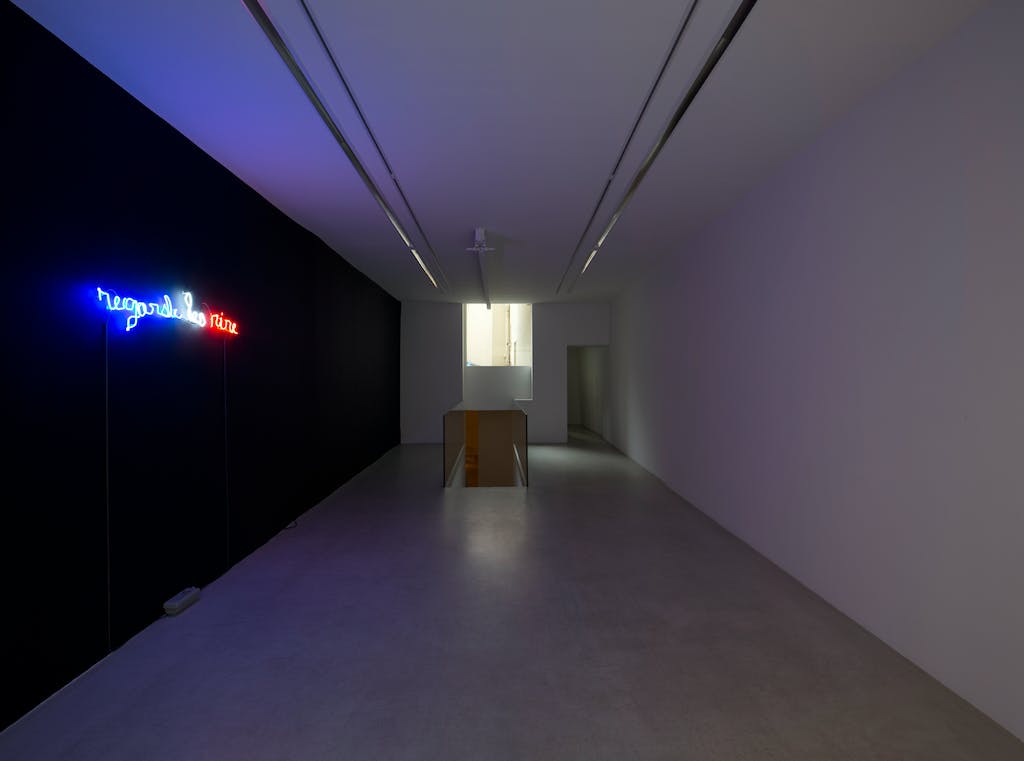 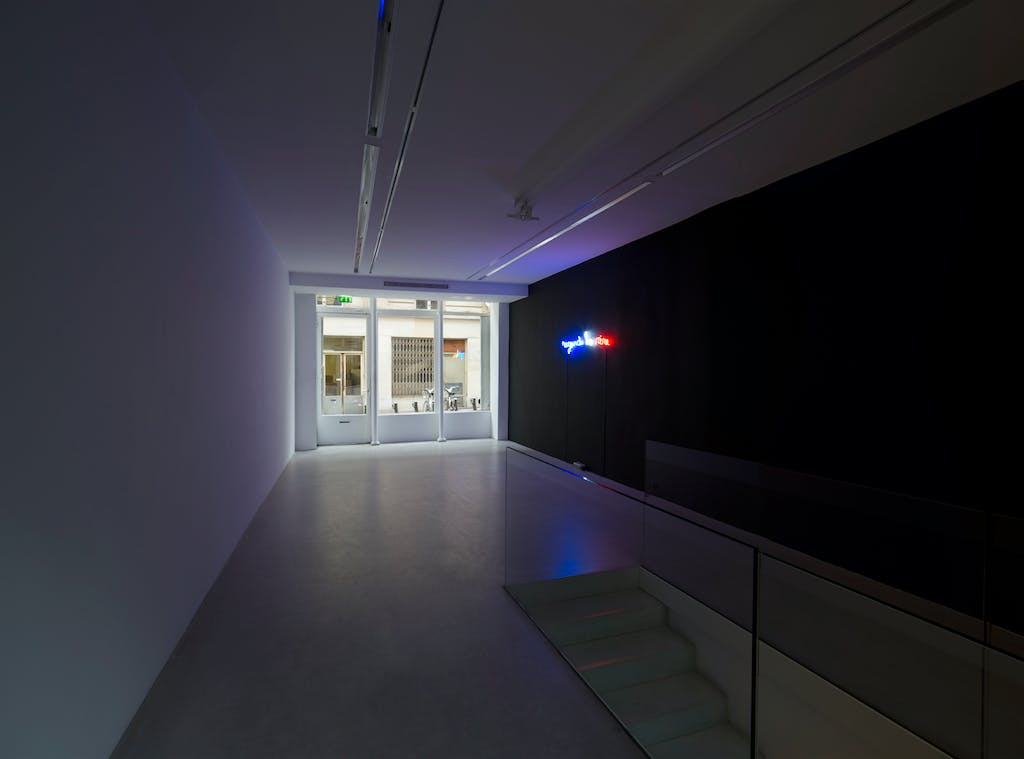 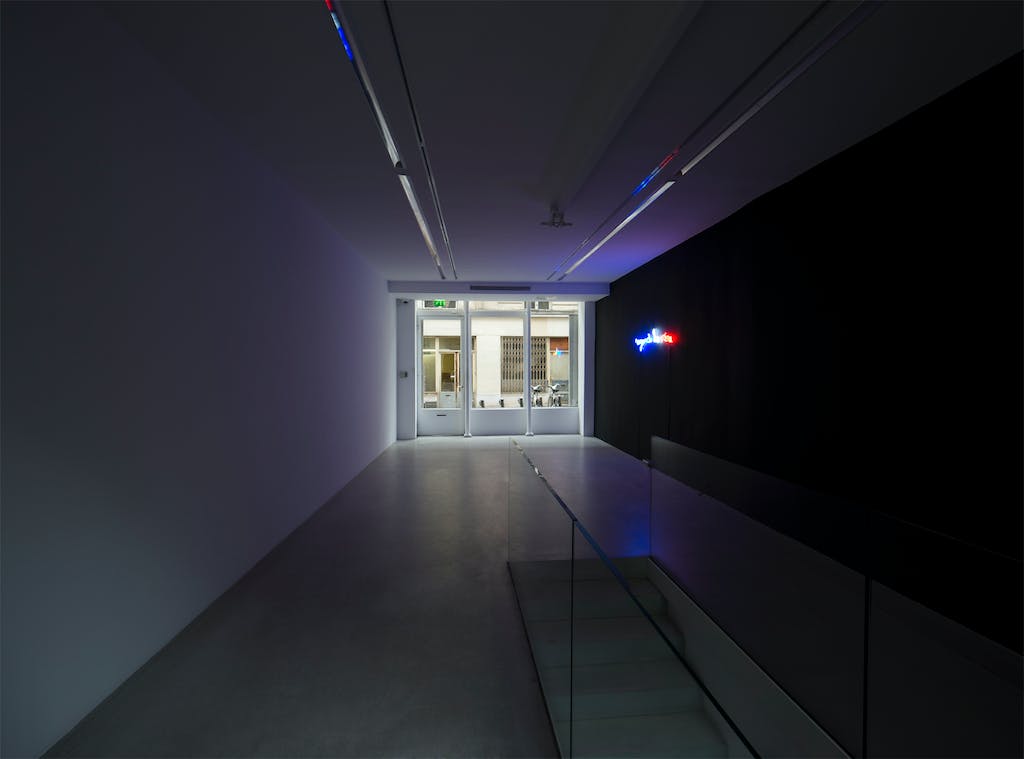 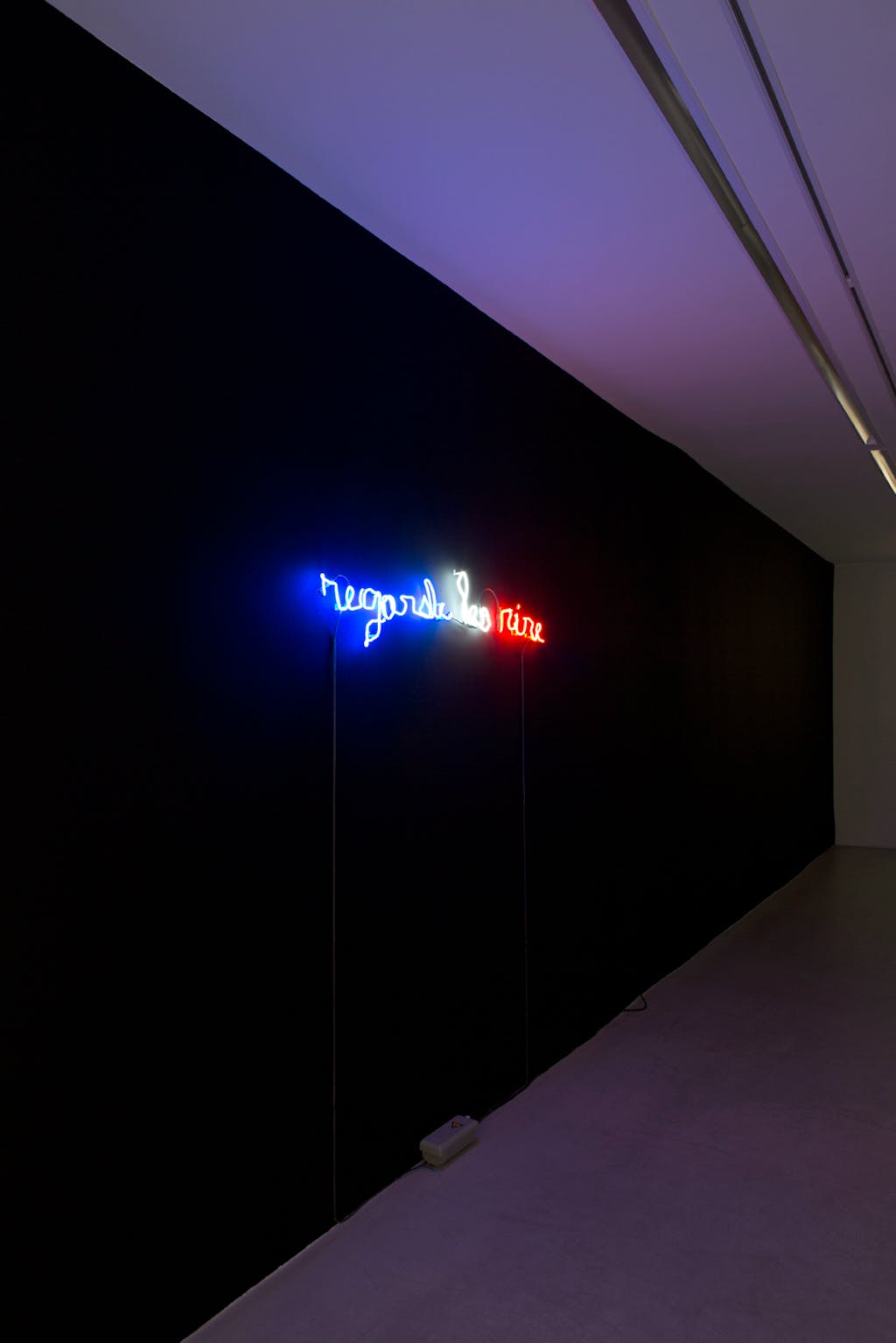 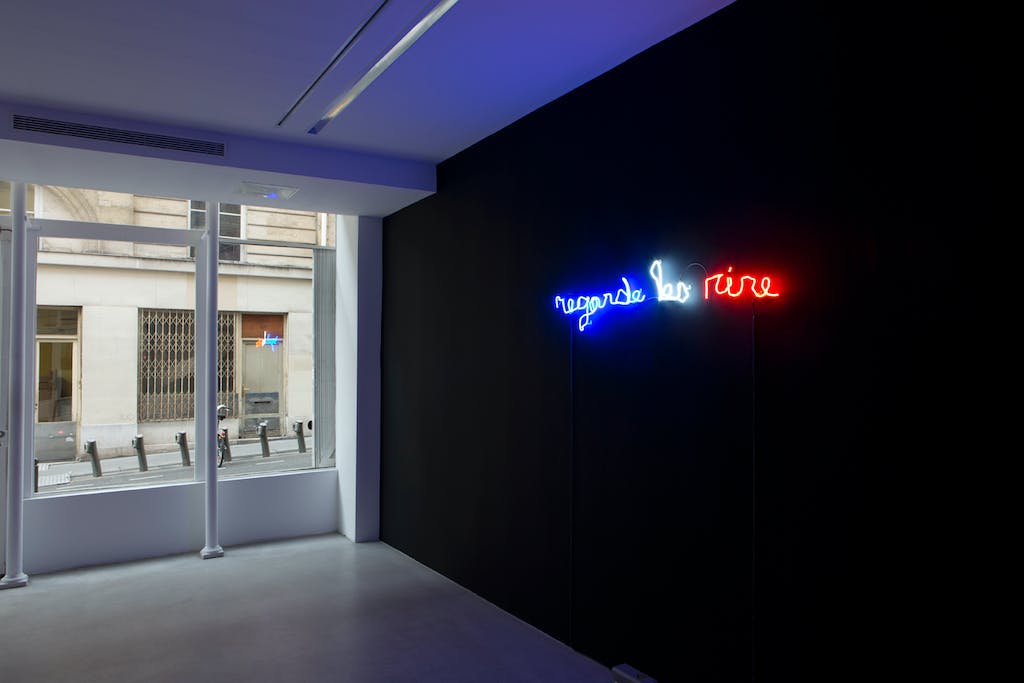 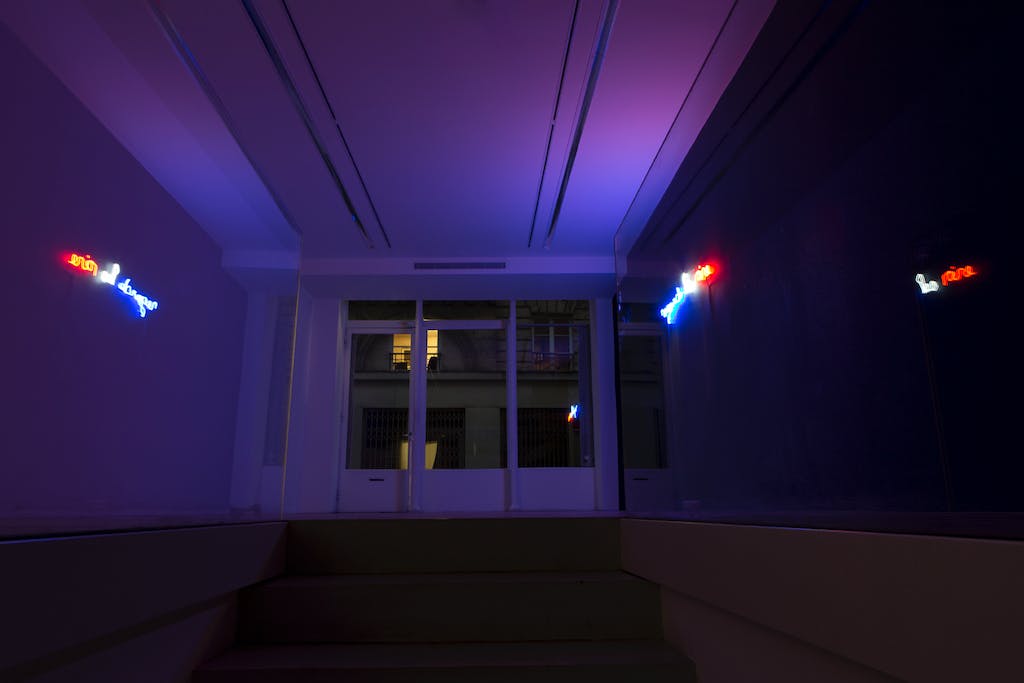 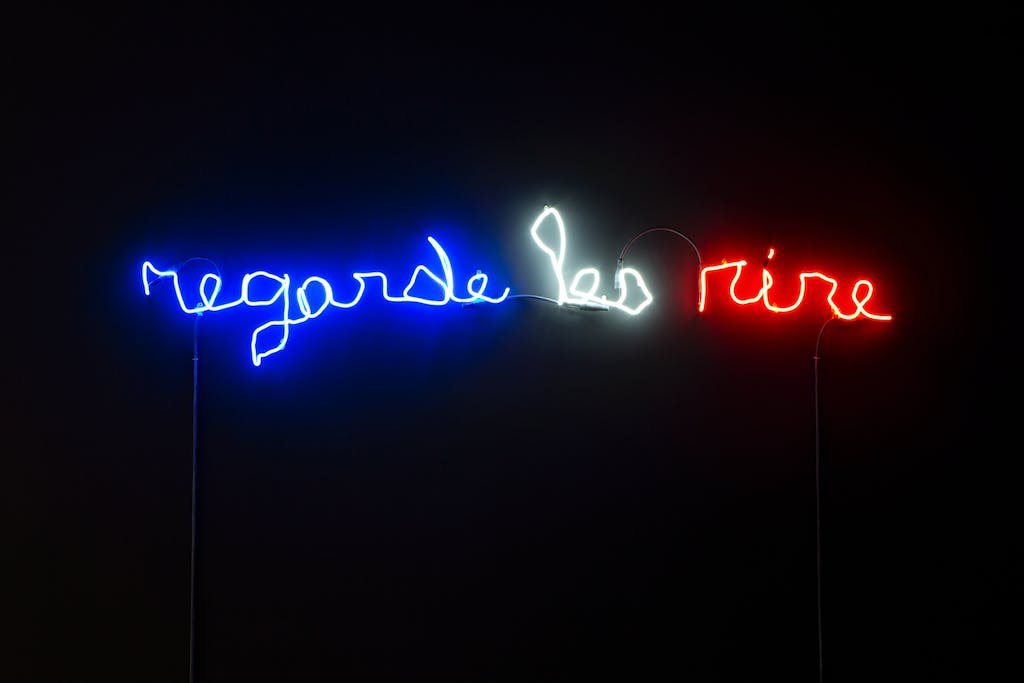 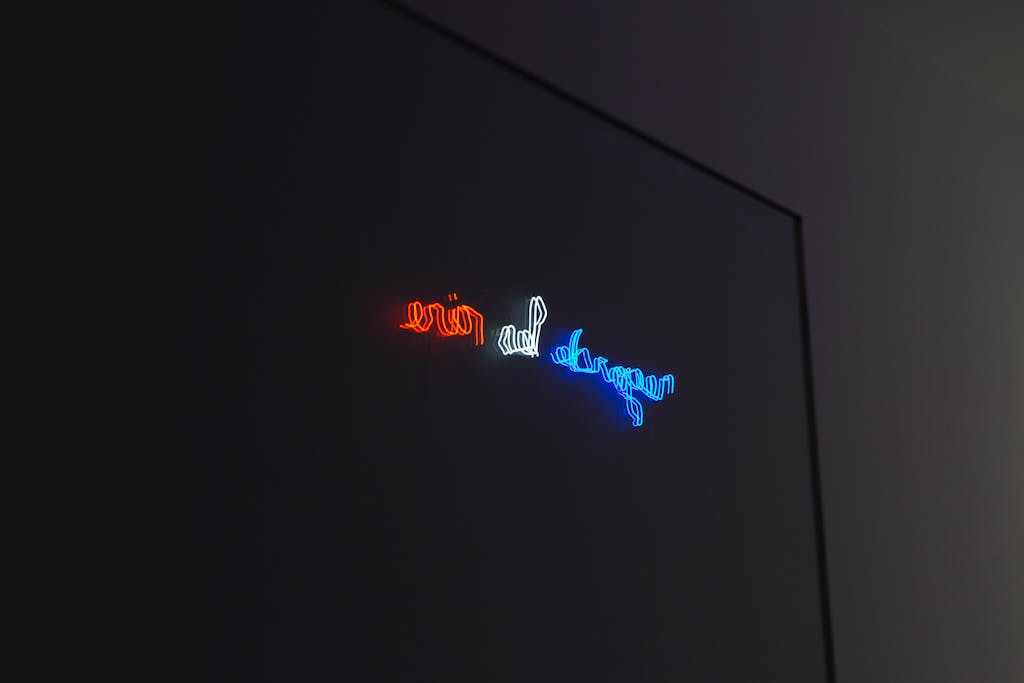 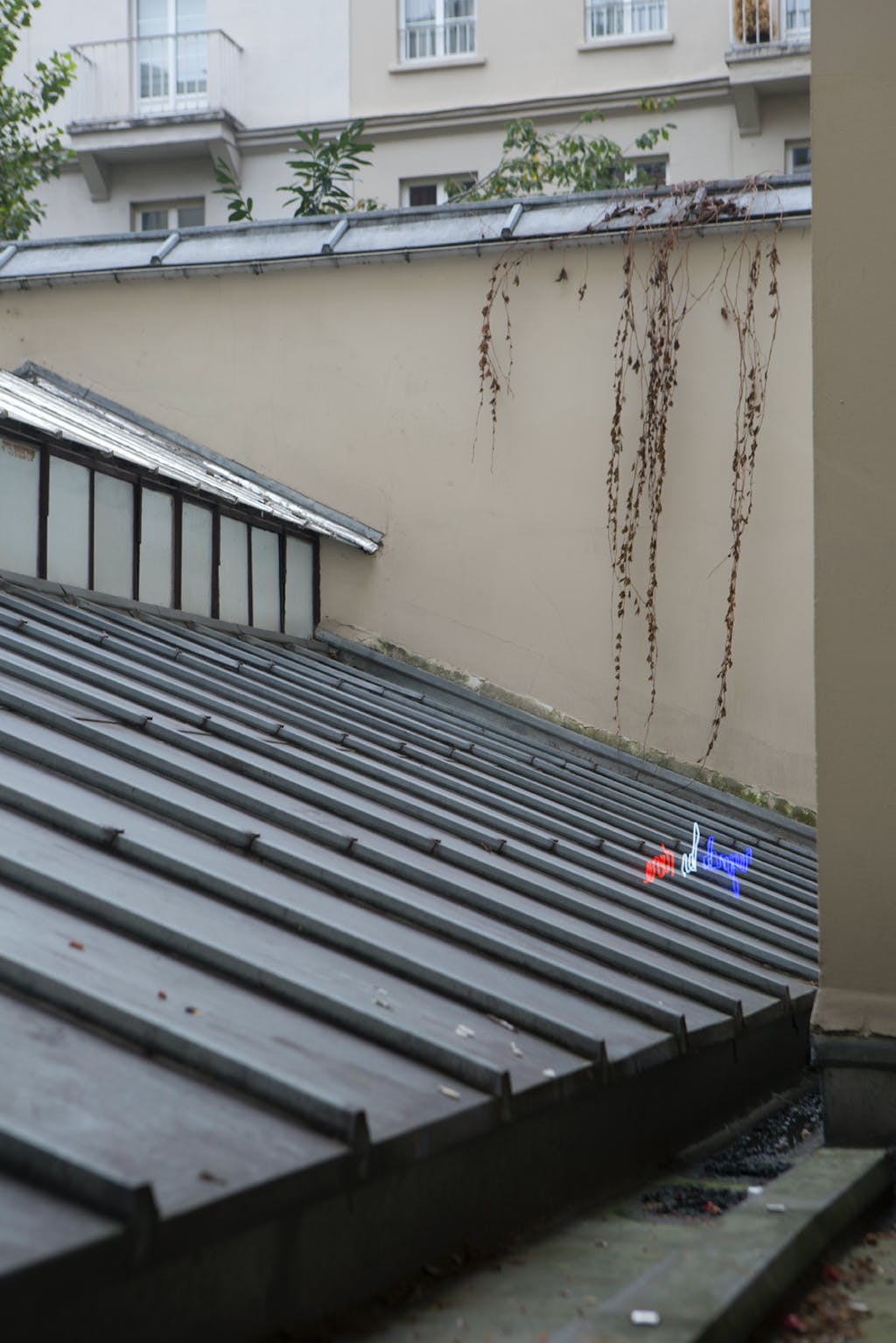 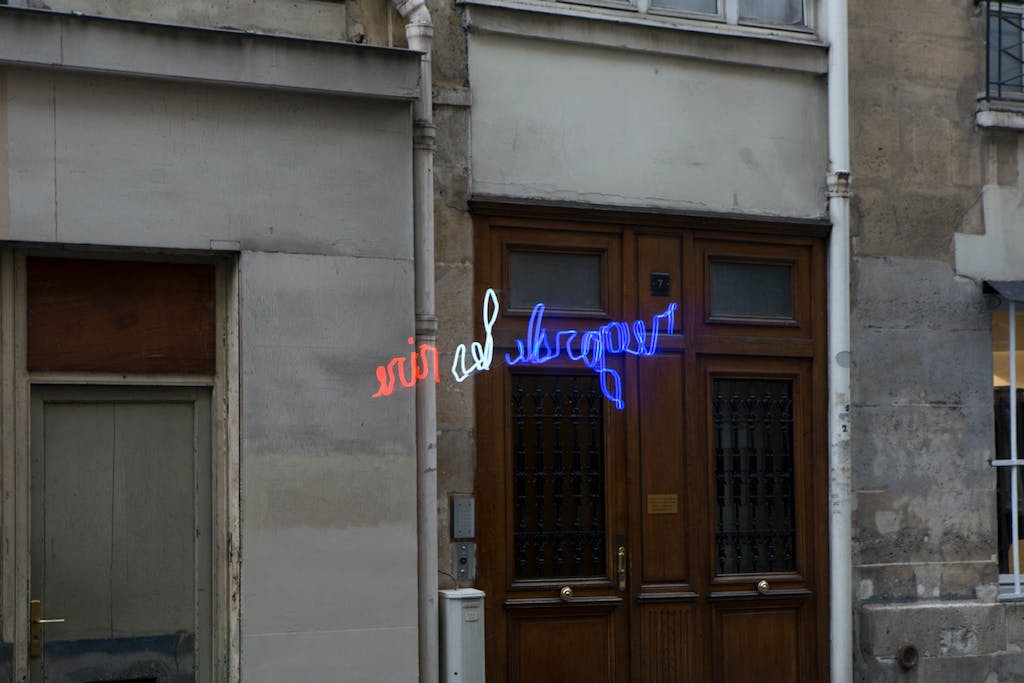 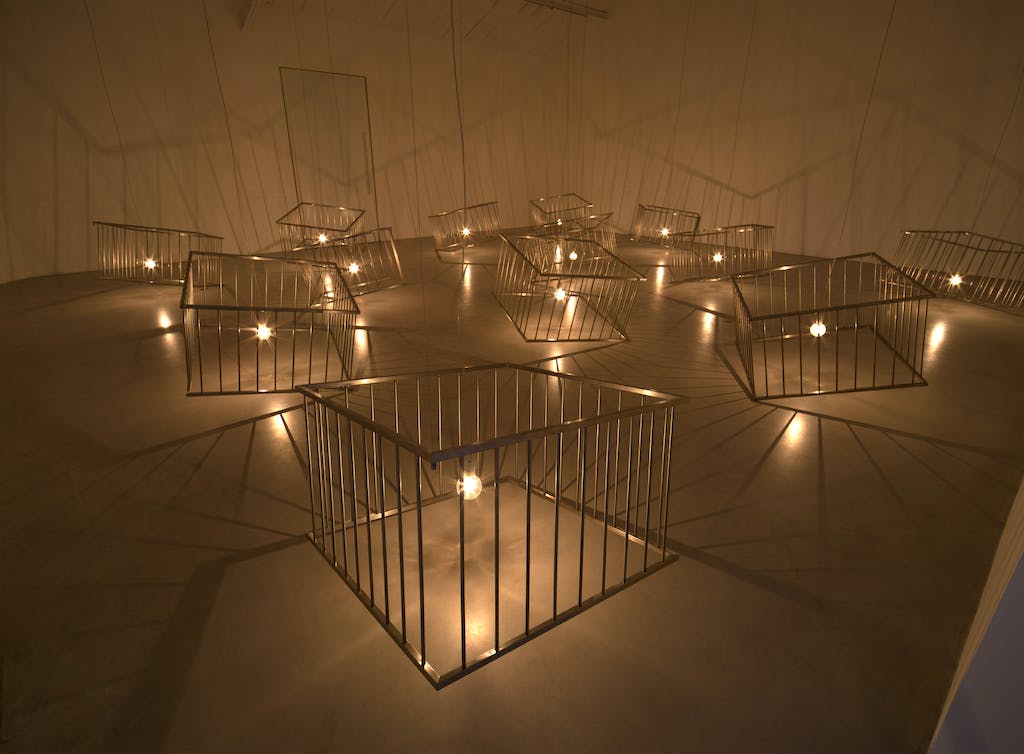 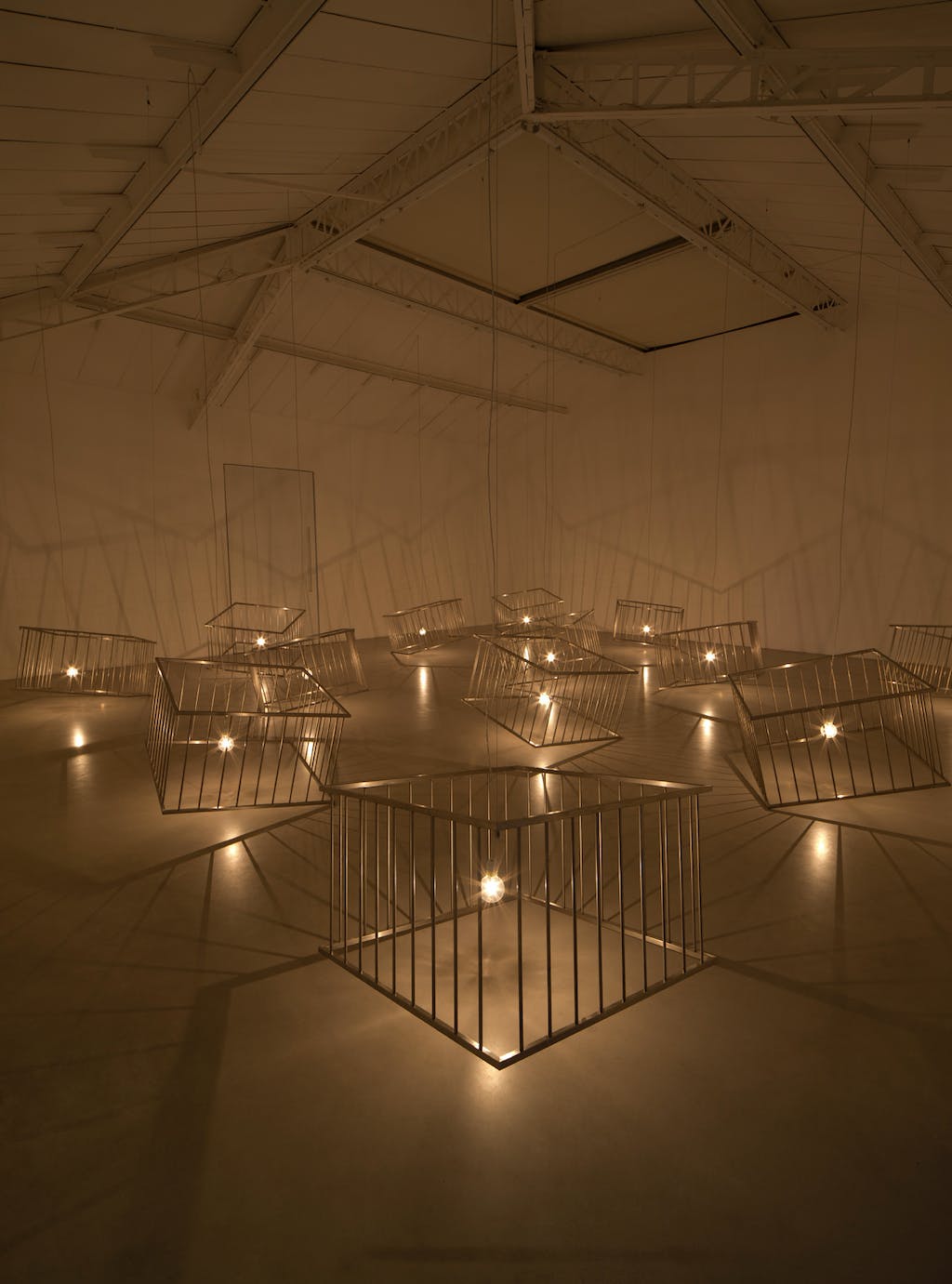 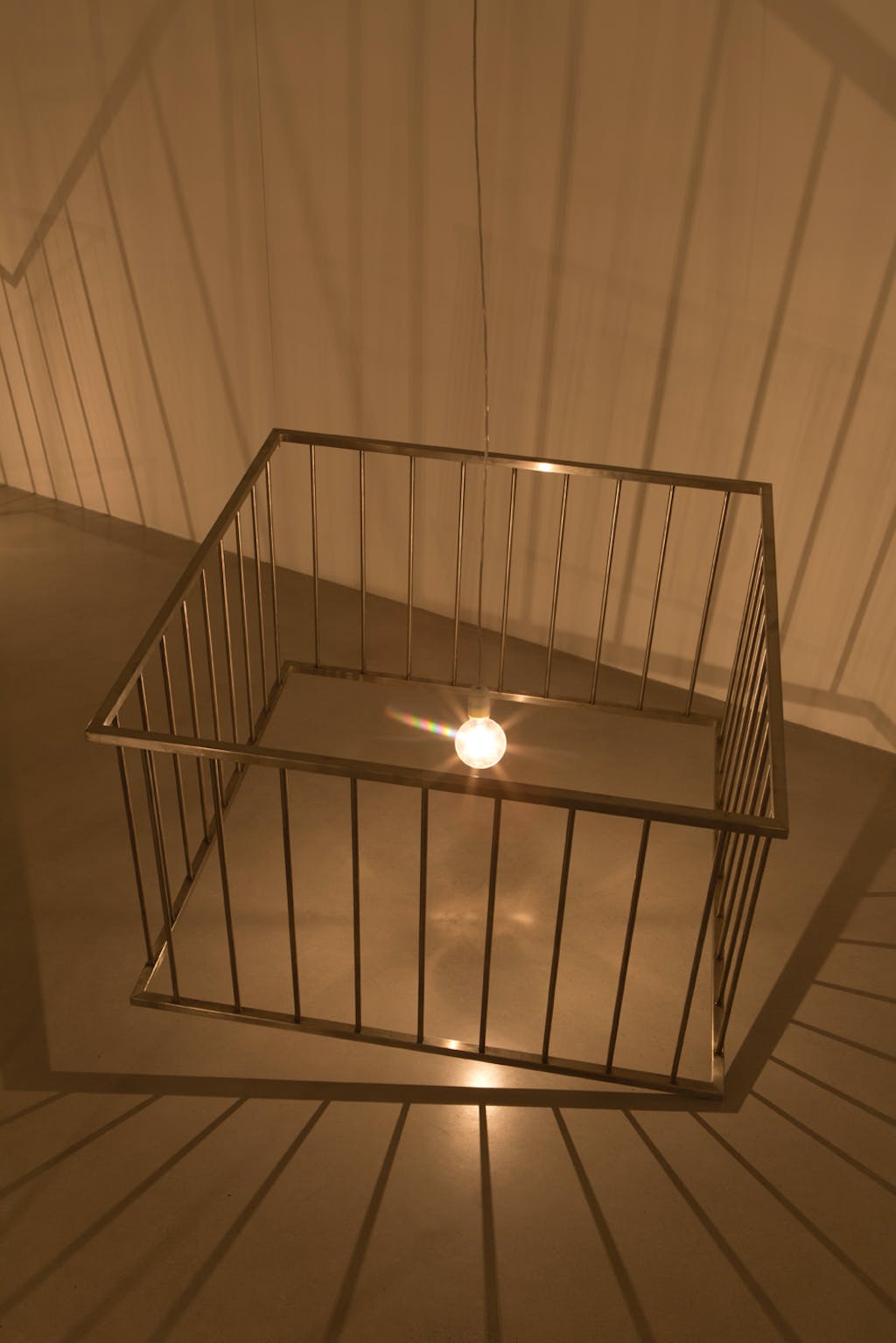 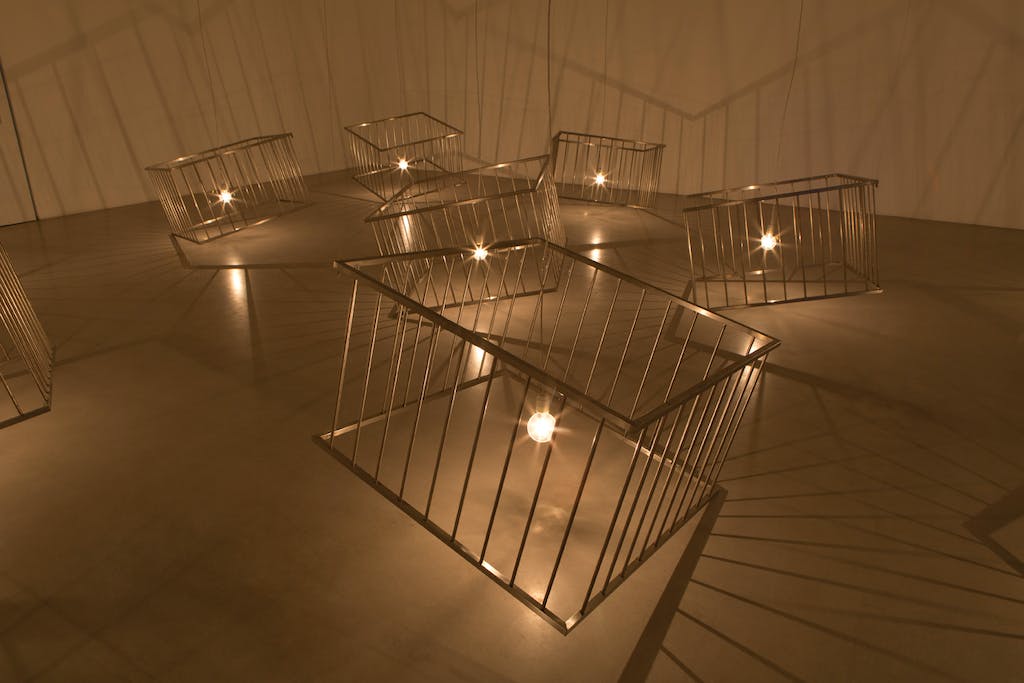 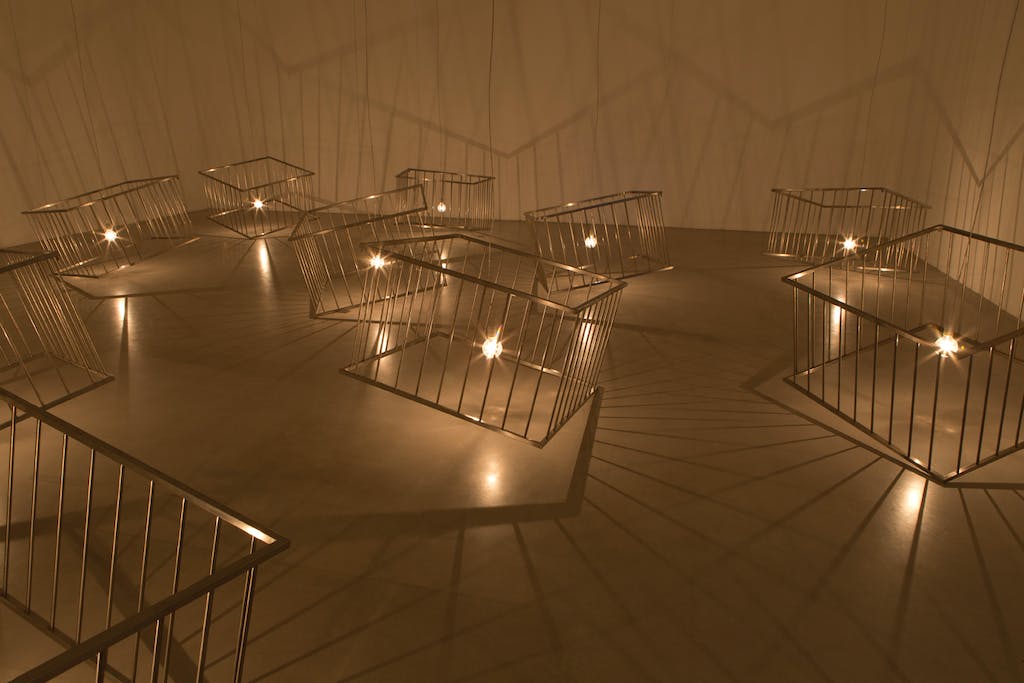 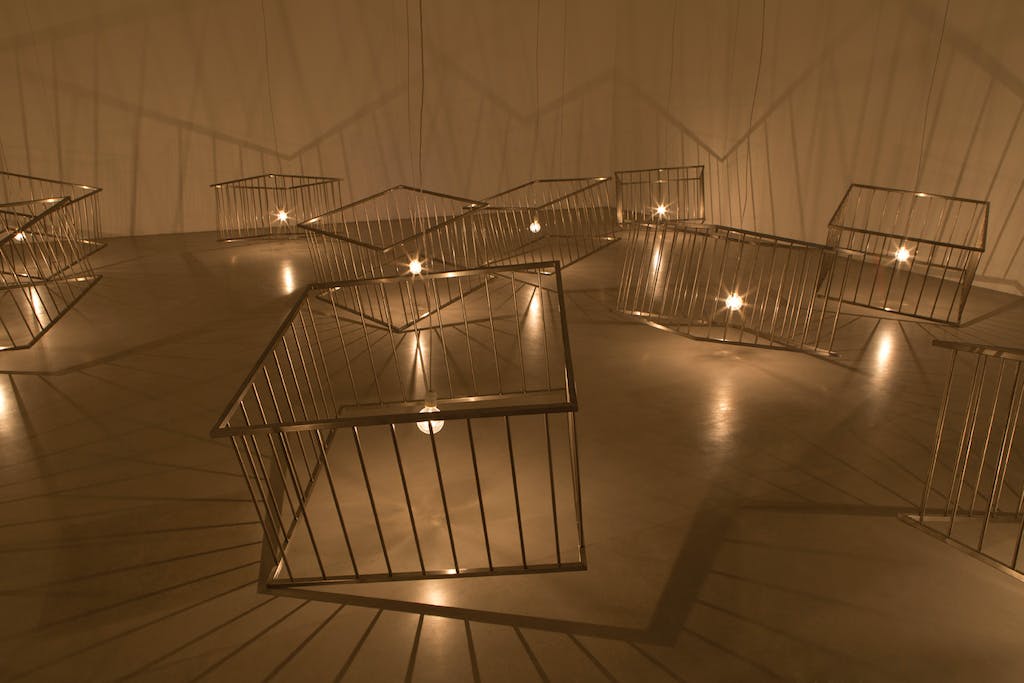