Kamel Mennour is pleased to present an exhibition by Chinese-born artist Huang
Yong Ping. Both in the gallery’s new space at 28 Avenue Matignon and at 47 Rue Saint-André des Arts, Huang Yong Ping is presenting the scale models, preparatory sketches, and satellite works of his Empires project for the 2016 Monumenta at the Grand Palais. The large-scale work is, in the words of Monumenta’s curator Jean de Loisy, ‘a symbolic landscape of today’s economic world.’ Taking on indeed the proportions of a landscape, the work is shaped by 305 shipping containers from all over the world together with a 29-metre-high lifting gantry, projecting the viewer into the surrounds of a contemporary
commercial port. Over the ‘islands’ of containers slides an immense, 254-metre-long snake skeleton, winding its way above the visitor and guiding her to its coveted object: an outsized replica of Napoleon’s cocked hat, an emblem of power. Huang Yong Ping unfolds throughout the nave of the Grand Palais a theatre evoking ‘the modification of the world, the metamorphoses of political and economic power, the rise of new geographic regions’ (Jean de Loisy).

For each of his major interventions, the artist has created a series of reduced-scale models, all of which demonstrate a creative process closely linked to the exhibition context. The exceptional architecture of the Grand Palais has been at the base of numerous Empires models on various scales: 1:100, 1:20, 1:50. These models are truly the artist’s working tools and reveal the stages of a herculean undertaking as the project outlines are refined over a period of constant negotiation between creative thought and the technical challenges posed by such a space, including architectural, material, and engineering constraints.

In the new space on the Avenue Matignon, Huang Yong Ping is exhibiting the project’s beginnings: the first model, on the scale of 1:100, begun in 2014 with simple materials, including wooden cubes for the containers and wire for the snake; and two watercolours from 2015, where the artist has expertly imagined perspectives of a large, central alley overshadowed by a giant cocked hat.

At 47 Rue Saint-André des Arts can be found a series of recent work, all of it conceived during Empire’s production phase, and including a model on the scale of 1:50. In gilded copper, metal, and wood, on a Trespa base engraved with the floor plan of the Grand Palais, this model shows the project in its final stages, with its mosaic of colours and the Napoleonic cocked hat—reproduced from a 3D scan of the hat worn by the Emperor in 1807 at the Battle of Eylau and housed in the Musée de l’Armée—placed over two columns of containers and forming a triumphal arch.

The artist conceived the two sculptures in aluminum during the making of the
Monumenta snake, as he was making visits to the foundry. Untitled (2016) evokes a strange animal born from the chance configuring of two parts of a vertebra from the large snake. The other, entitled De celui qui mange est sorti ce qui se mange (2016), is made up of a long table into which has been built a fragment from the jaw of the Grand Palais snake, a part of its row of teeth accidently missing and leaving a gaping hole. As is often the case for Huang Yong Ping, chance becomes a point of departure for a new idea. With its title borrowed from an Old Testament parable—Samson’s enigma: ‘Out of the eater came forth meat, and out of the strong came forth sweetness’—the work evokes the cycle of transformation, that of the food chain as well as that of the transmission of
power and knowledge.

The two large watercolours, each measuring almost 4 metres in width and hung to face the sculptures, develop a series of references to two of the artist’s favourite animals, the horse and the snake, testifying to the breadth and complexity of the thought process behind the Monumenta work. Neuf chevaux (2016) shows three pairs of horses, each holding in its mouth flags evoking three aspects of the close relationship between horses and human beings (in their respectively scientific, political, and artistic dimension) and its role in the creation of empires. Each group shows at once the permanence of the horse in our culture, our dependence on it, and its key role in the history of Western civilization. Cinq serpents (2016) includes a large, stencilled snake skin surrounded by three drawings, figuring a total of five snakes. From left to right appear the two Laocoön snakes from the famous classical group sculpture illustrating a moment of tragic tension in which it is impossible to tell whether man or snake will win out; the figure of Saint Michael slaying the dragon, from a group sculpture kept at the Palais de Papes, where Hung Yong has exhibited a tiled floor representing a large blue and yellow dragon; and a
nine-headed snake placed on the ground plan of the Grand Palais, with a bowler hat held by a hand above it. What is at stake here is the question of the struggle between man and animal, which one can see as the tension between the chaos of nature and the human desire for order, each of which throws the other out of joint.
© Axelle Blanc 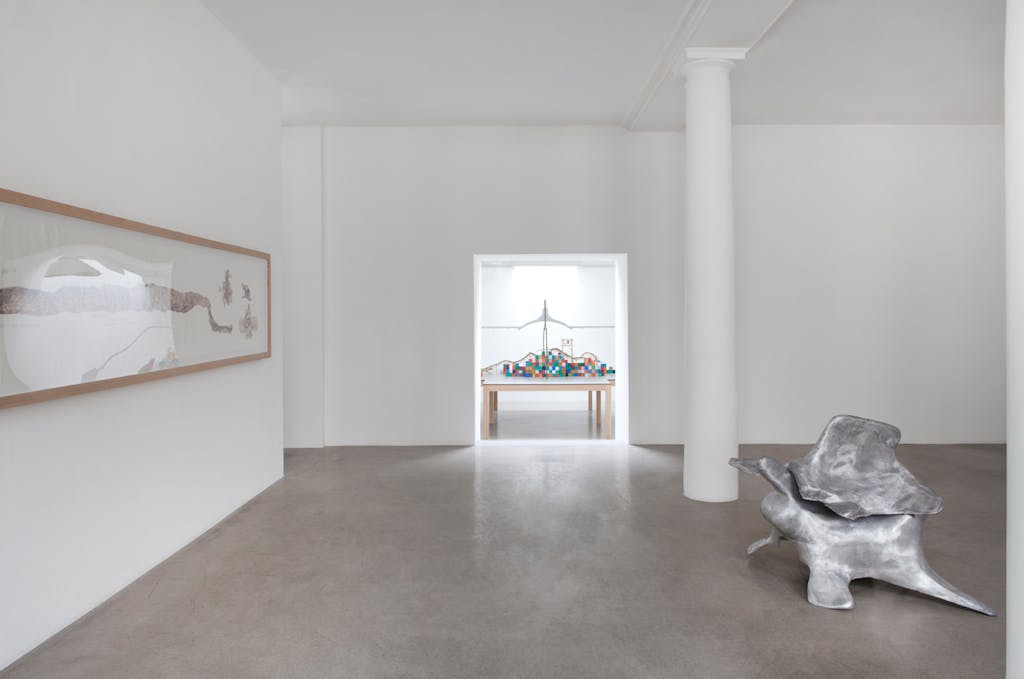 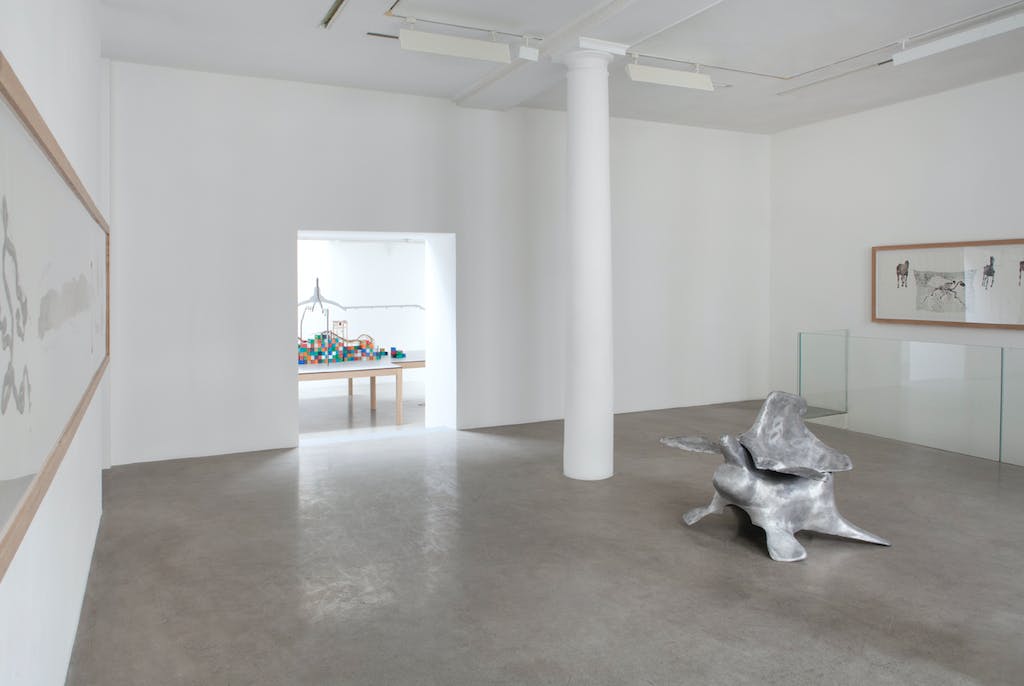 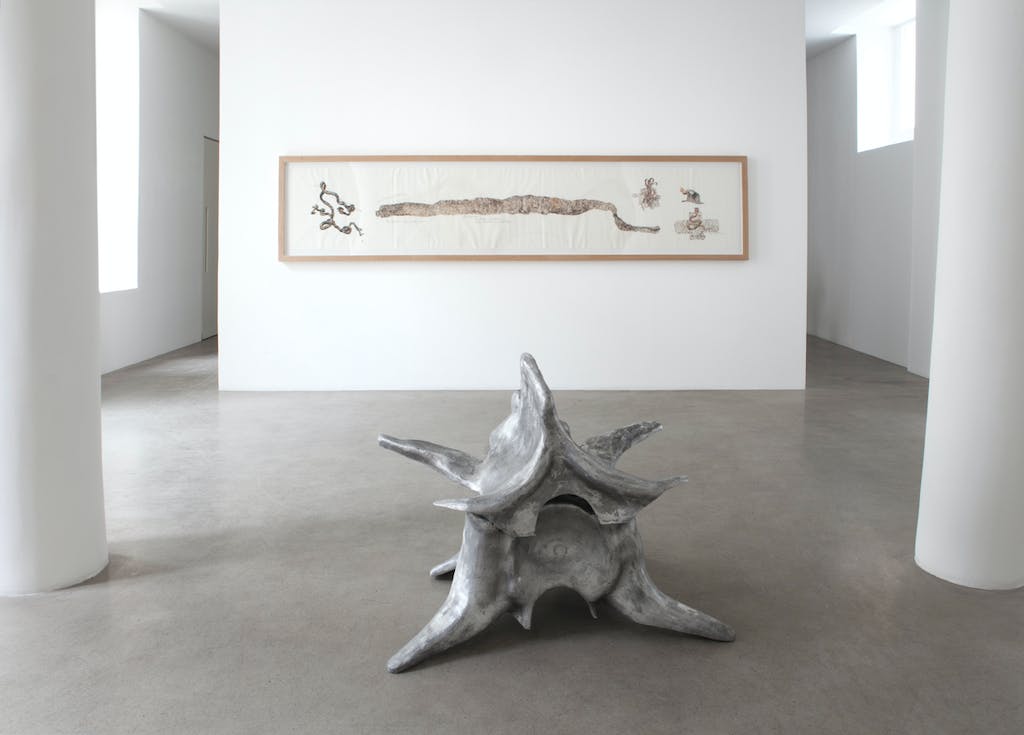 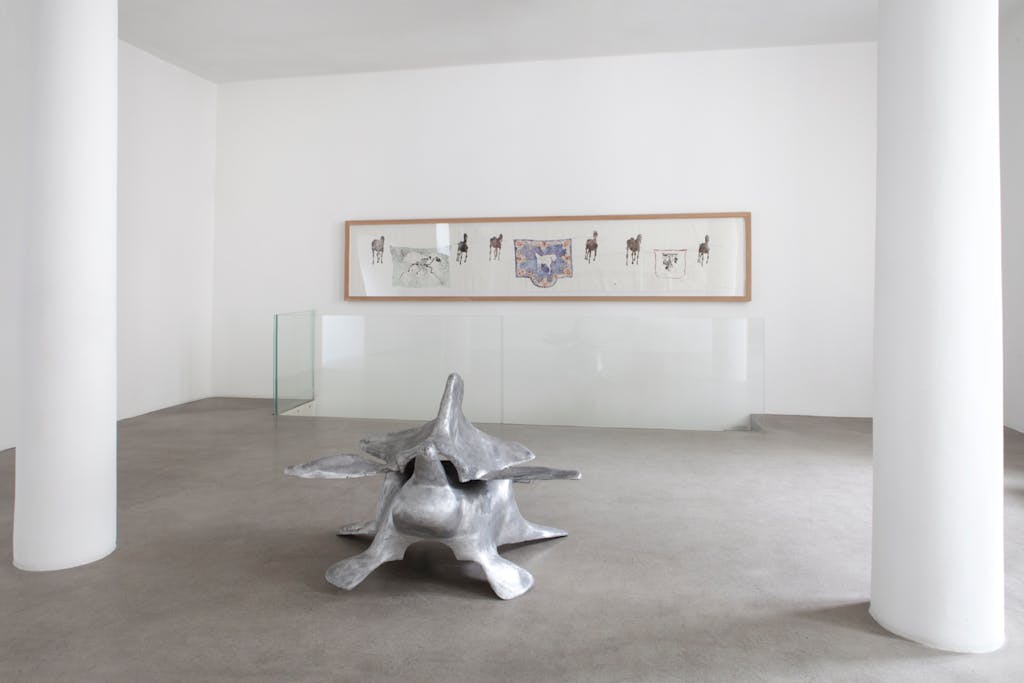 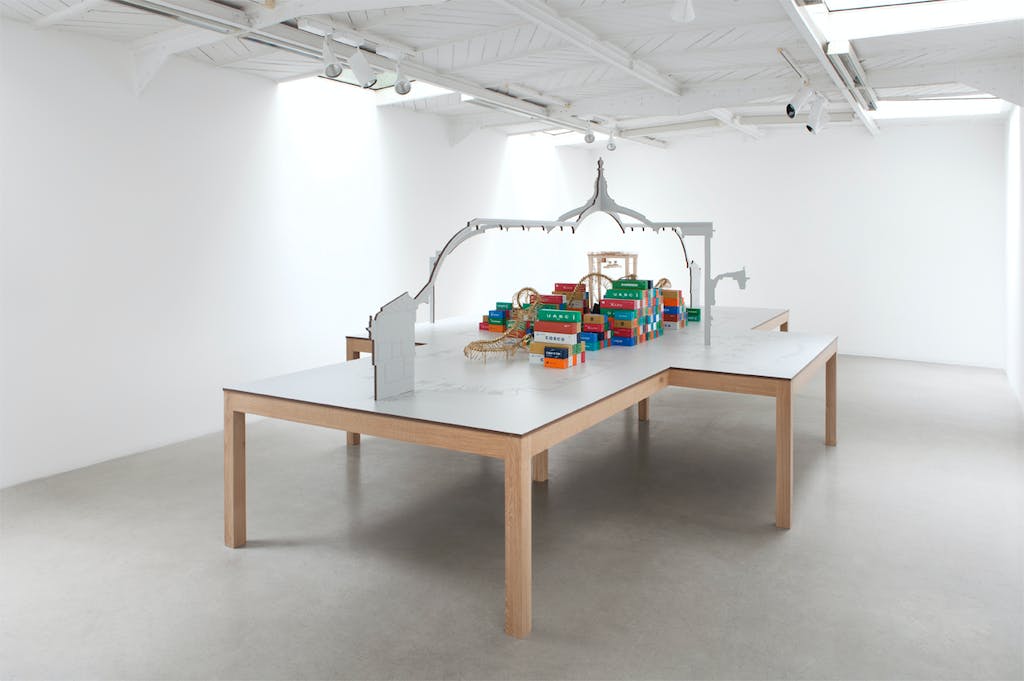 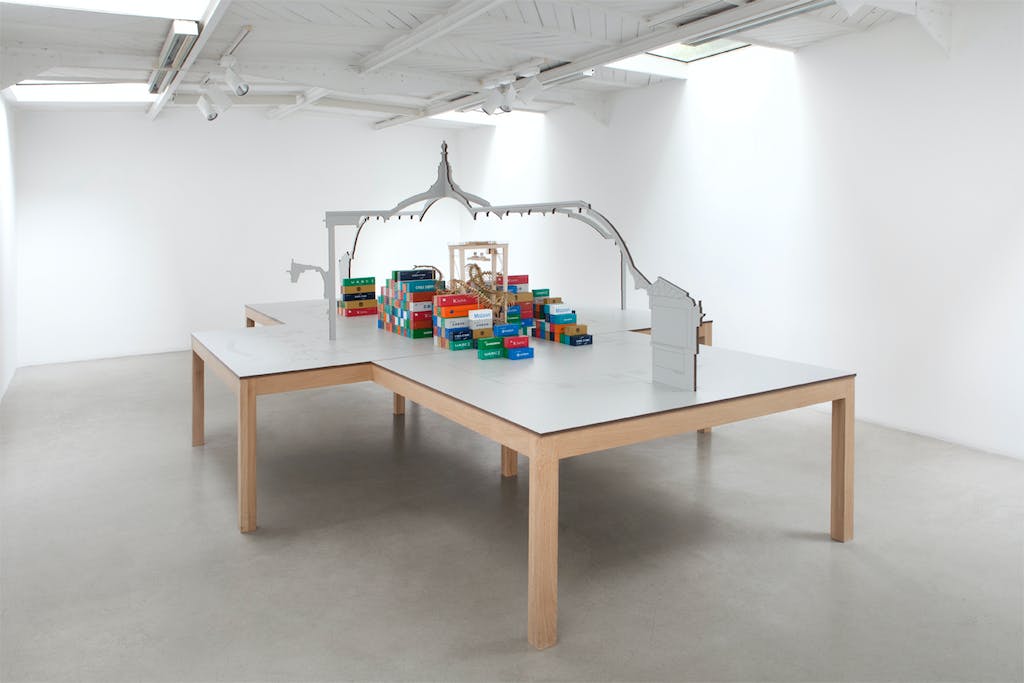 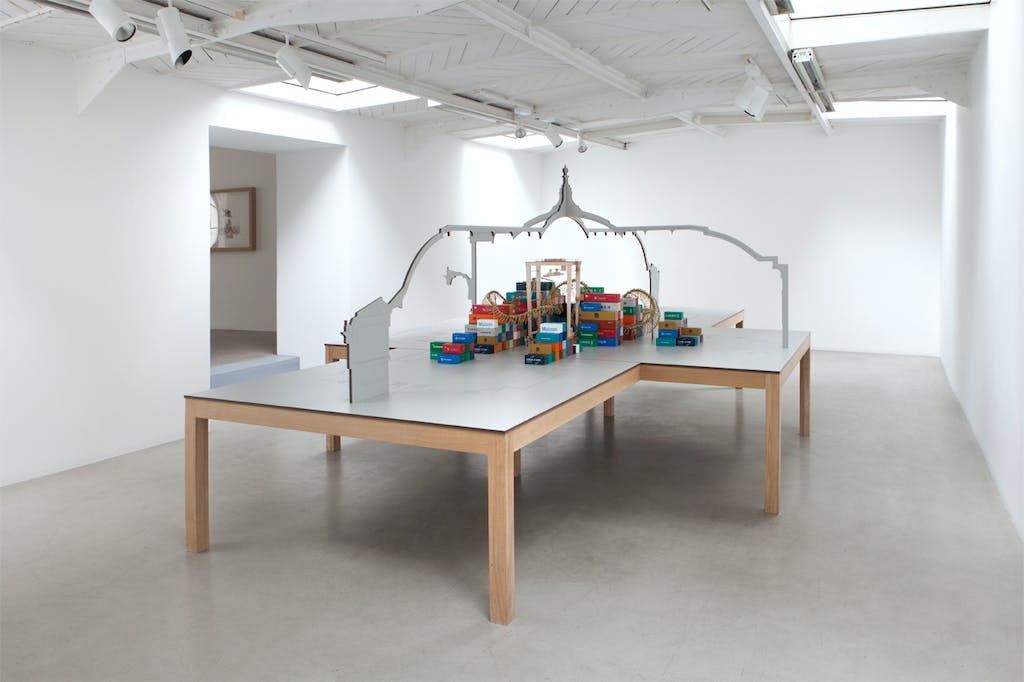 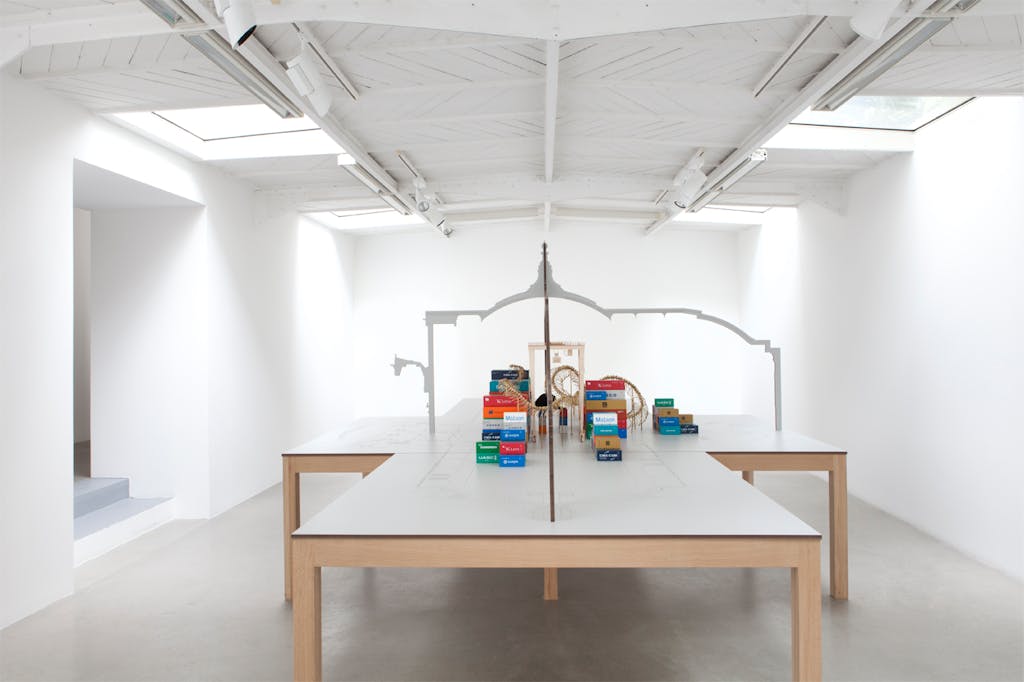 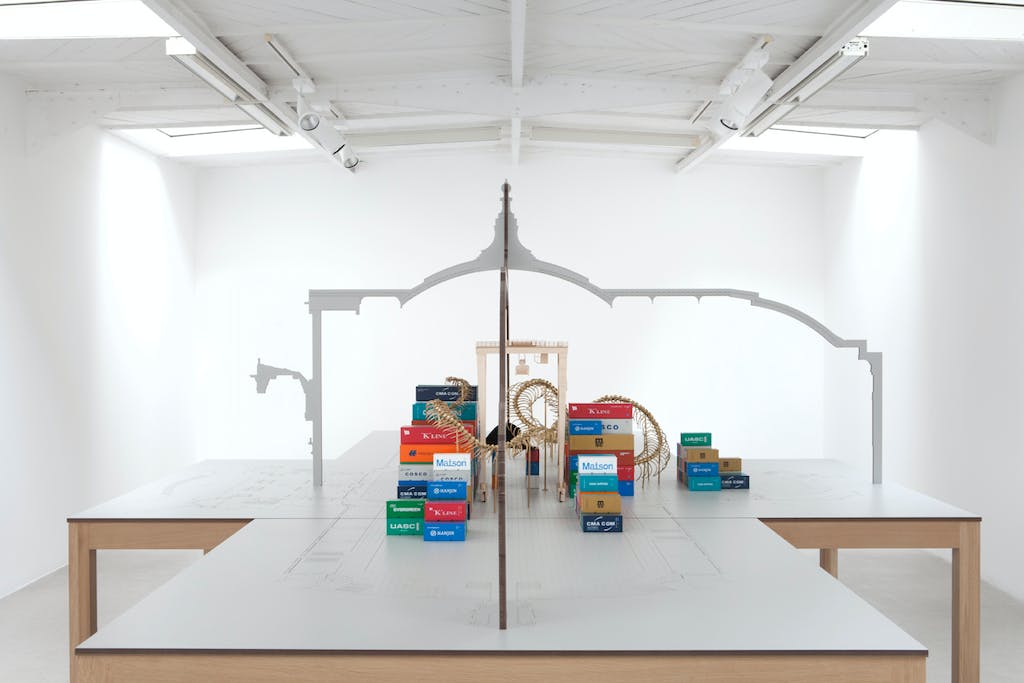 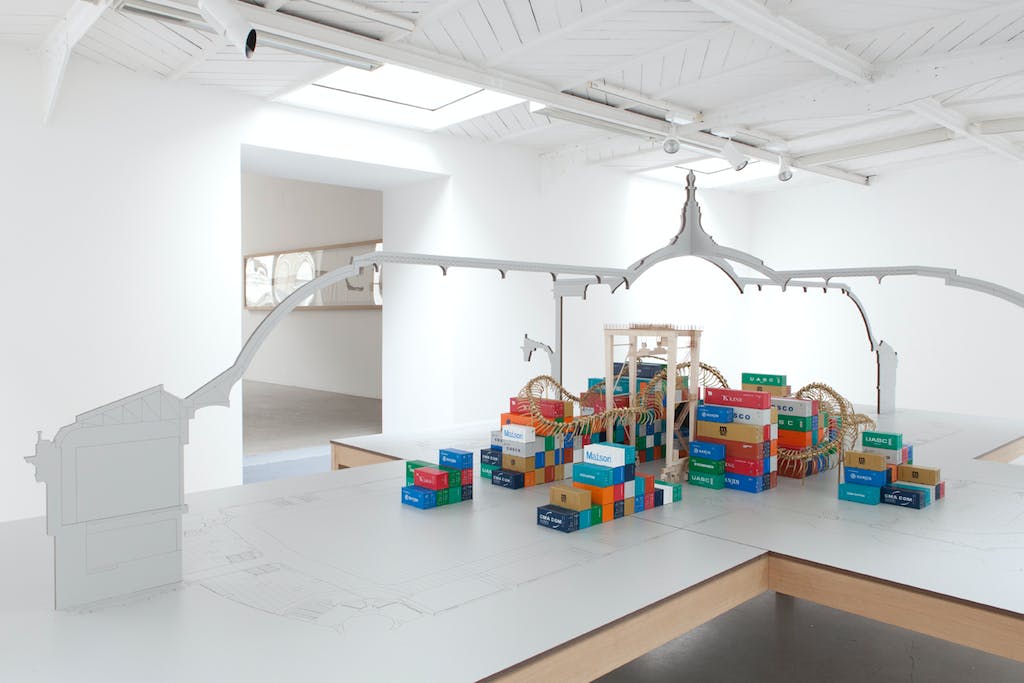 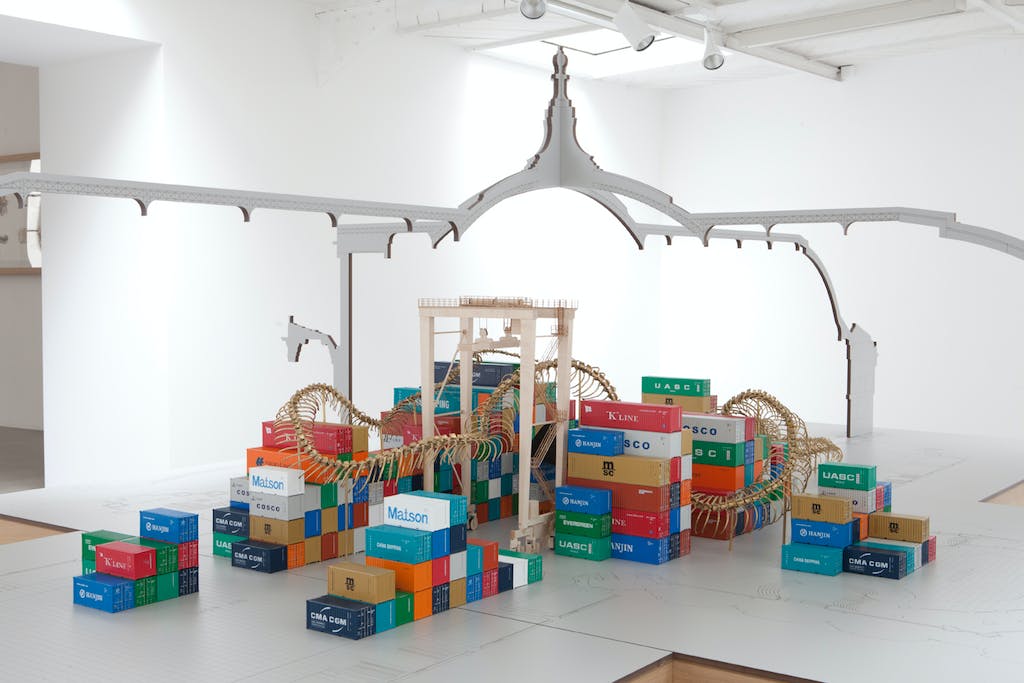 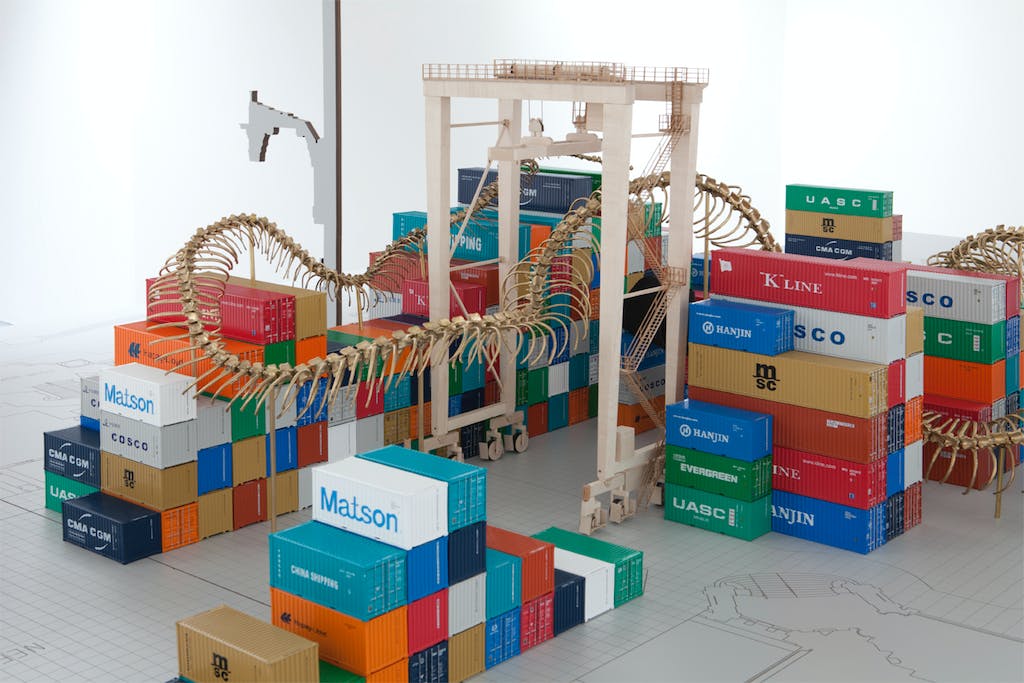 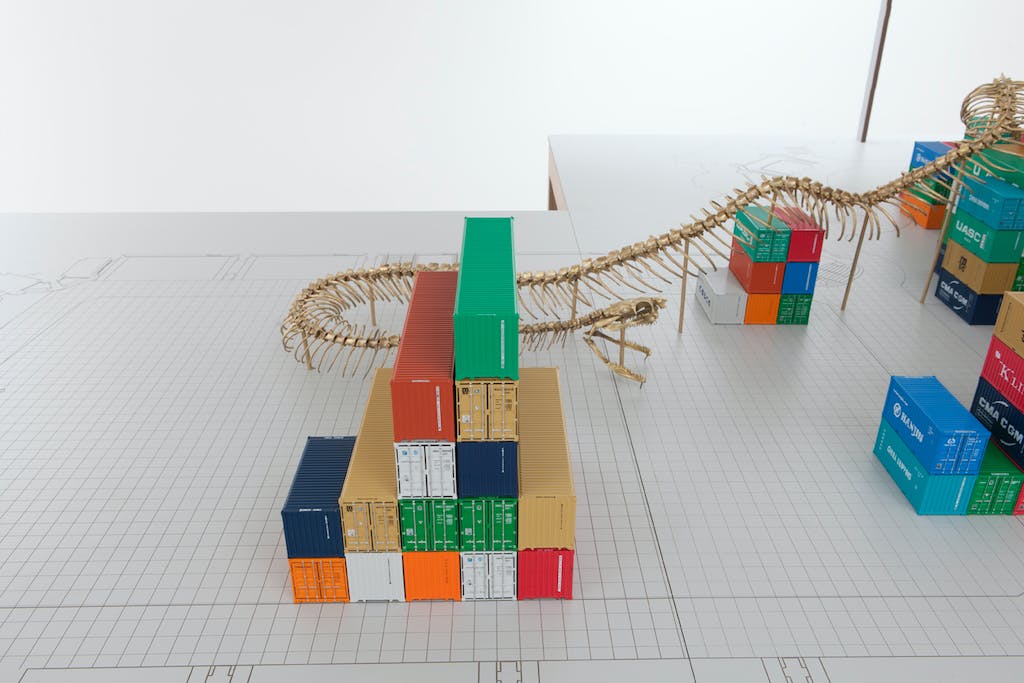 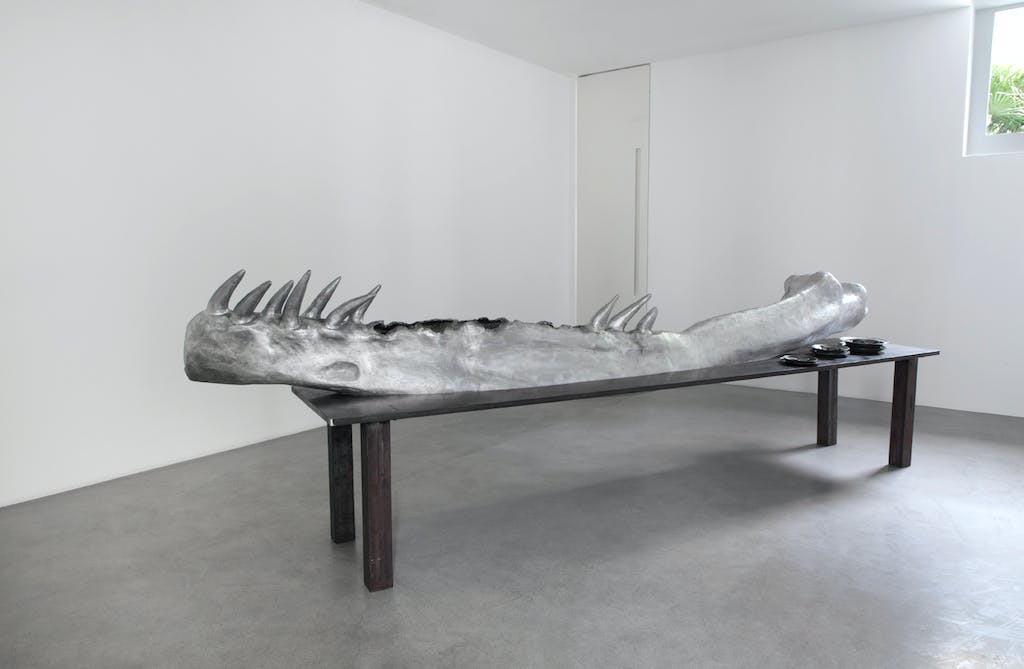 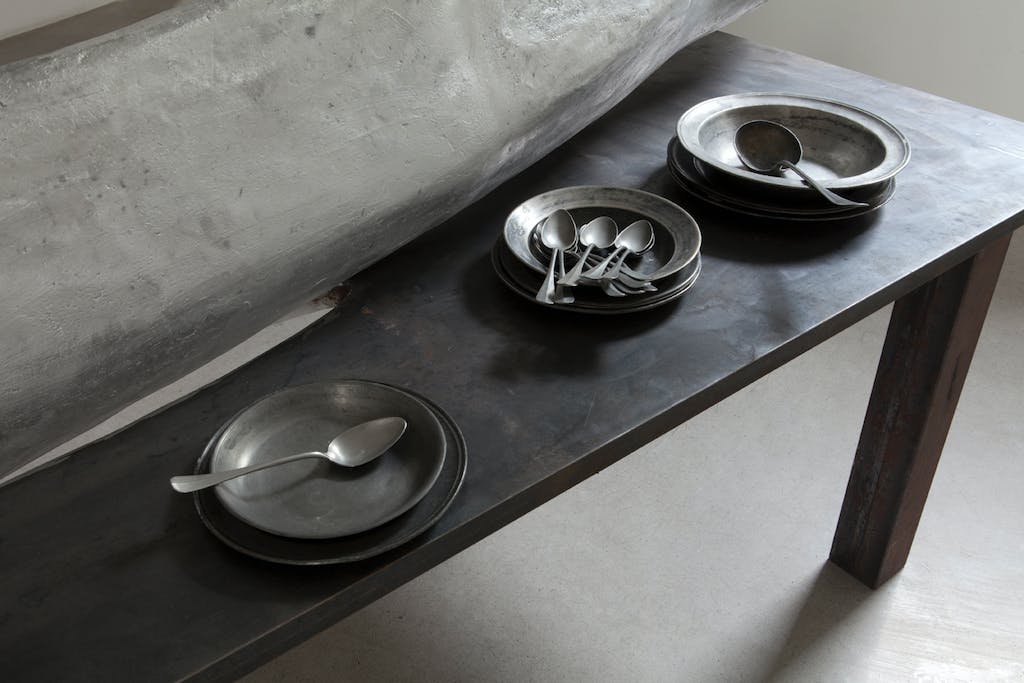 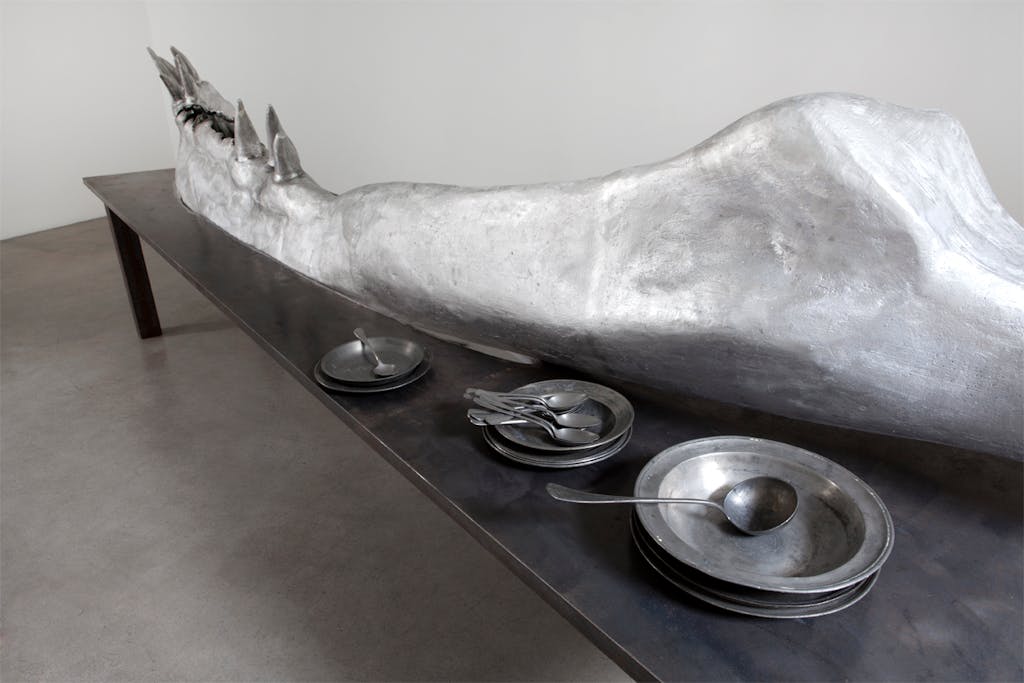 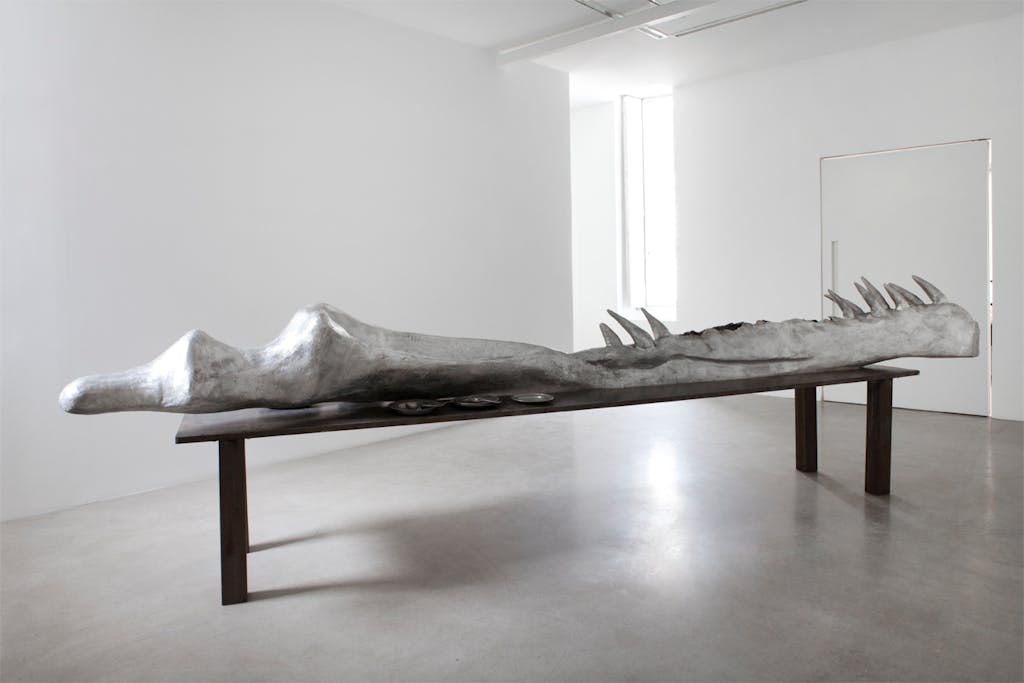 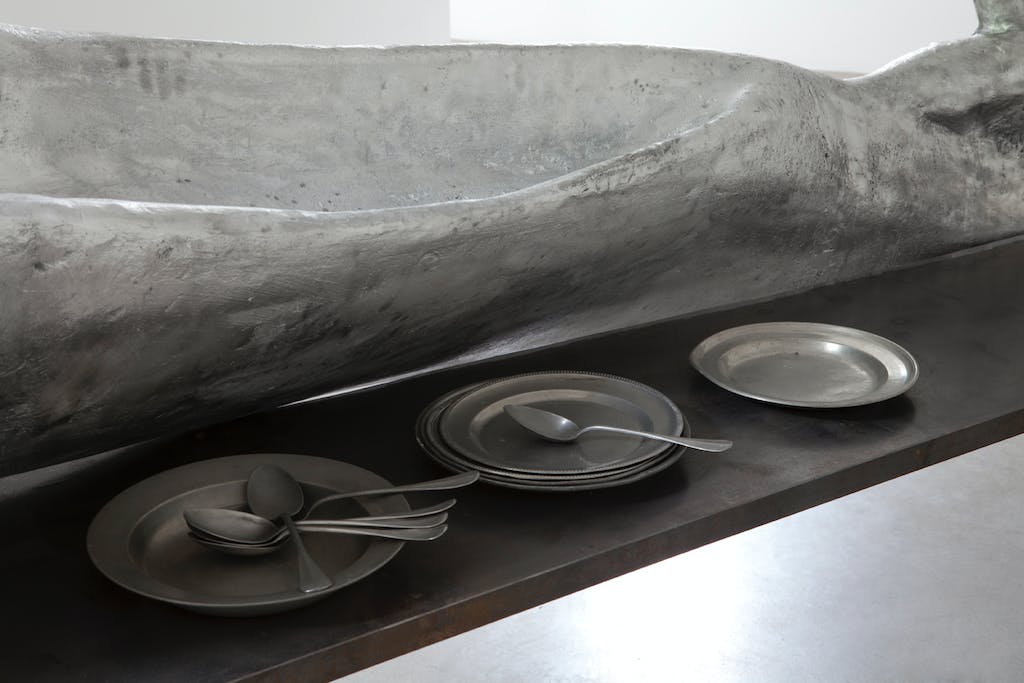 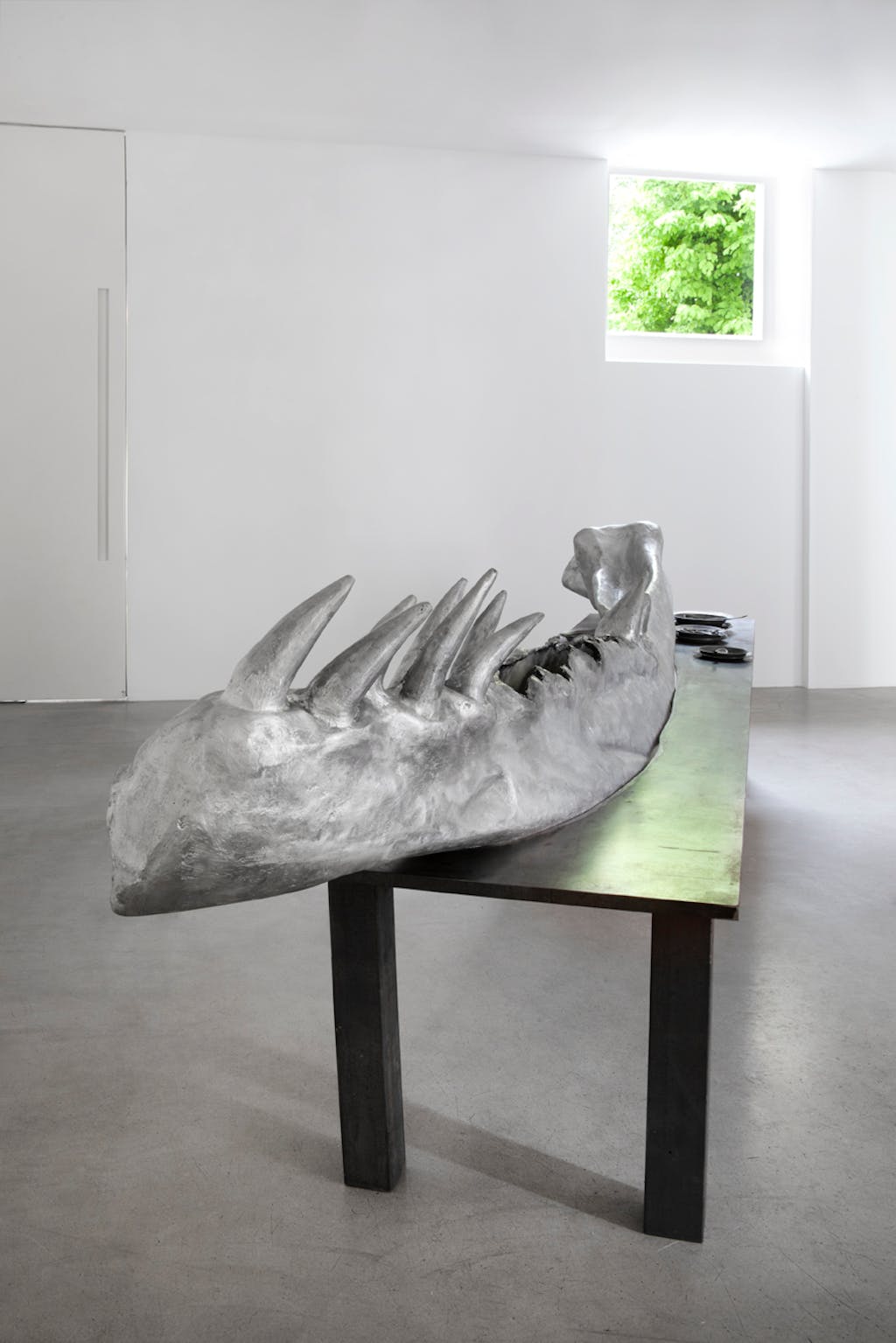 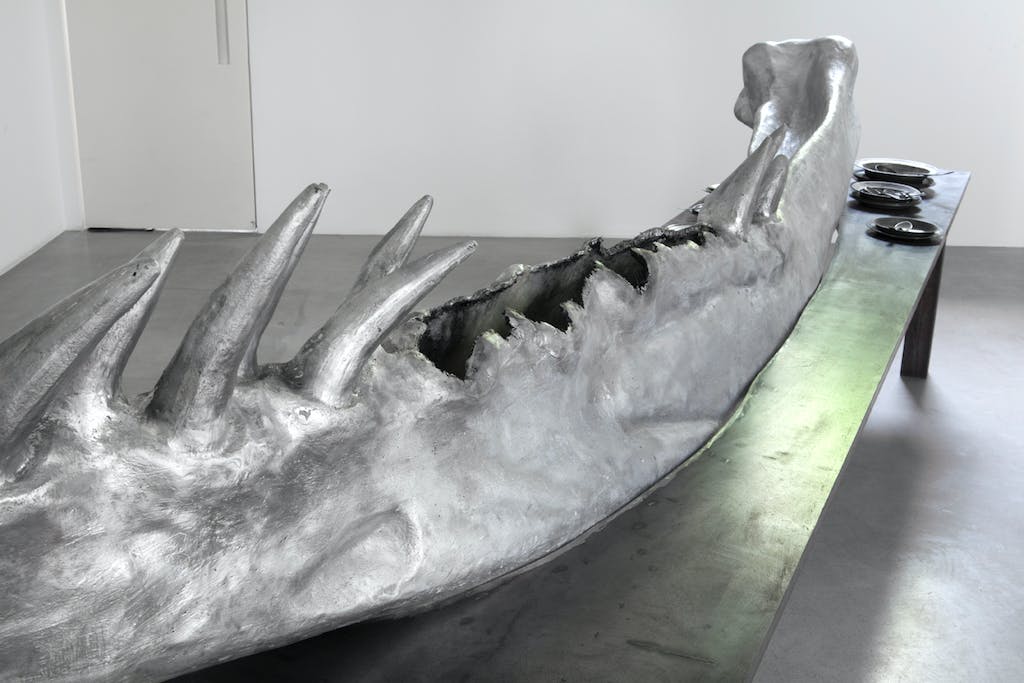 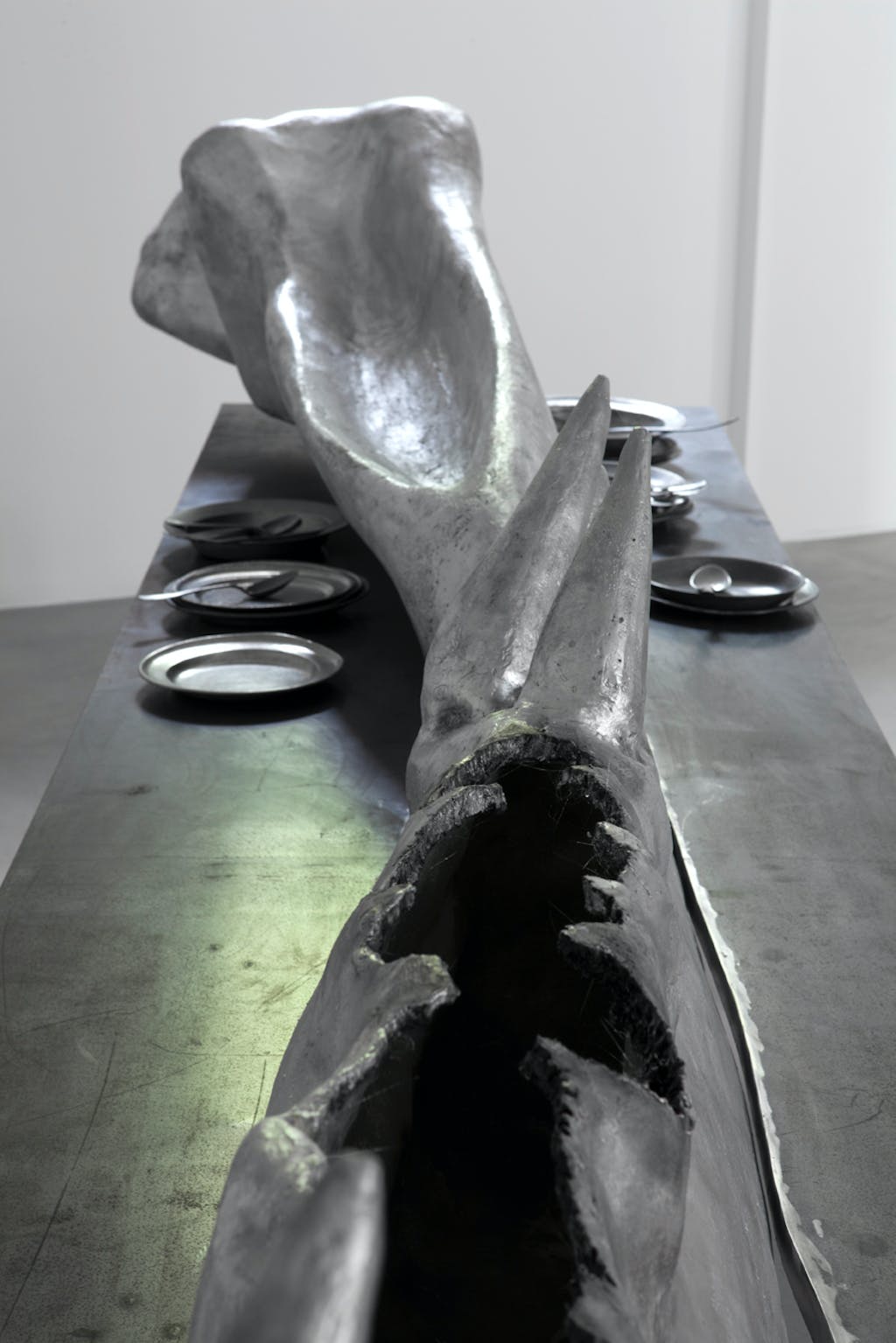 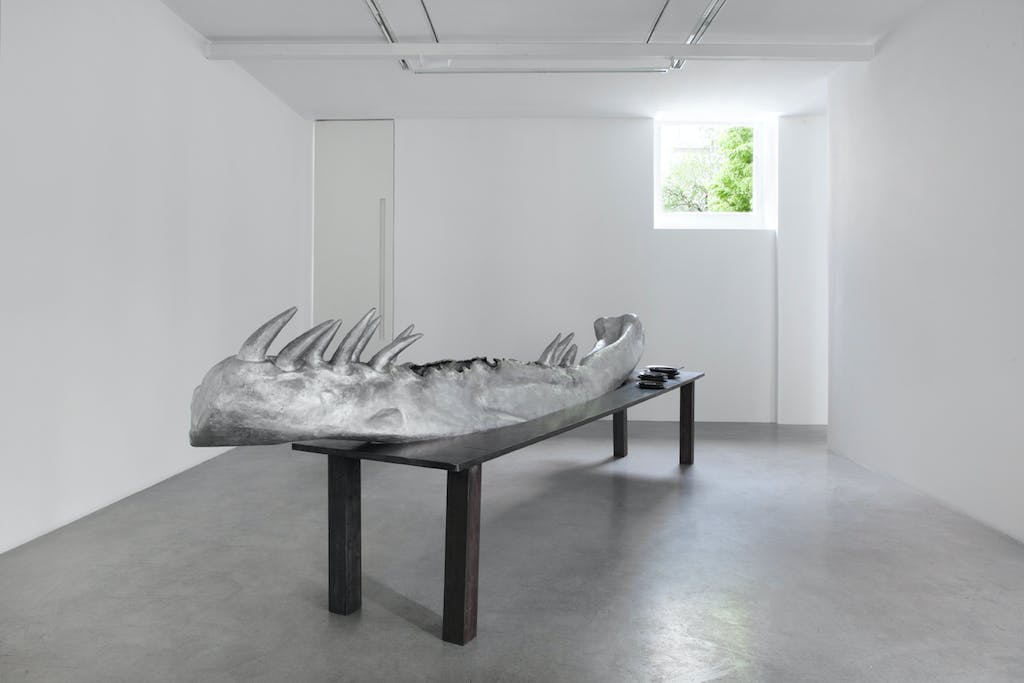 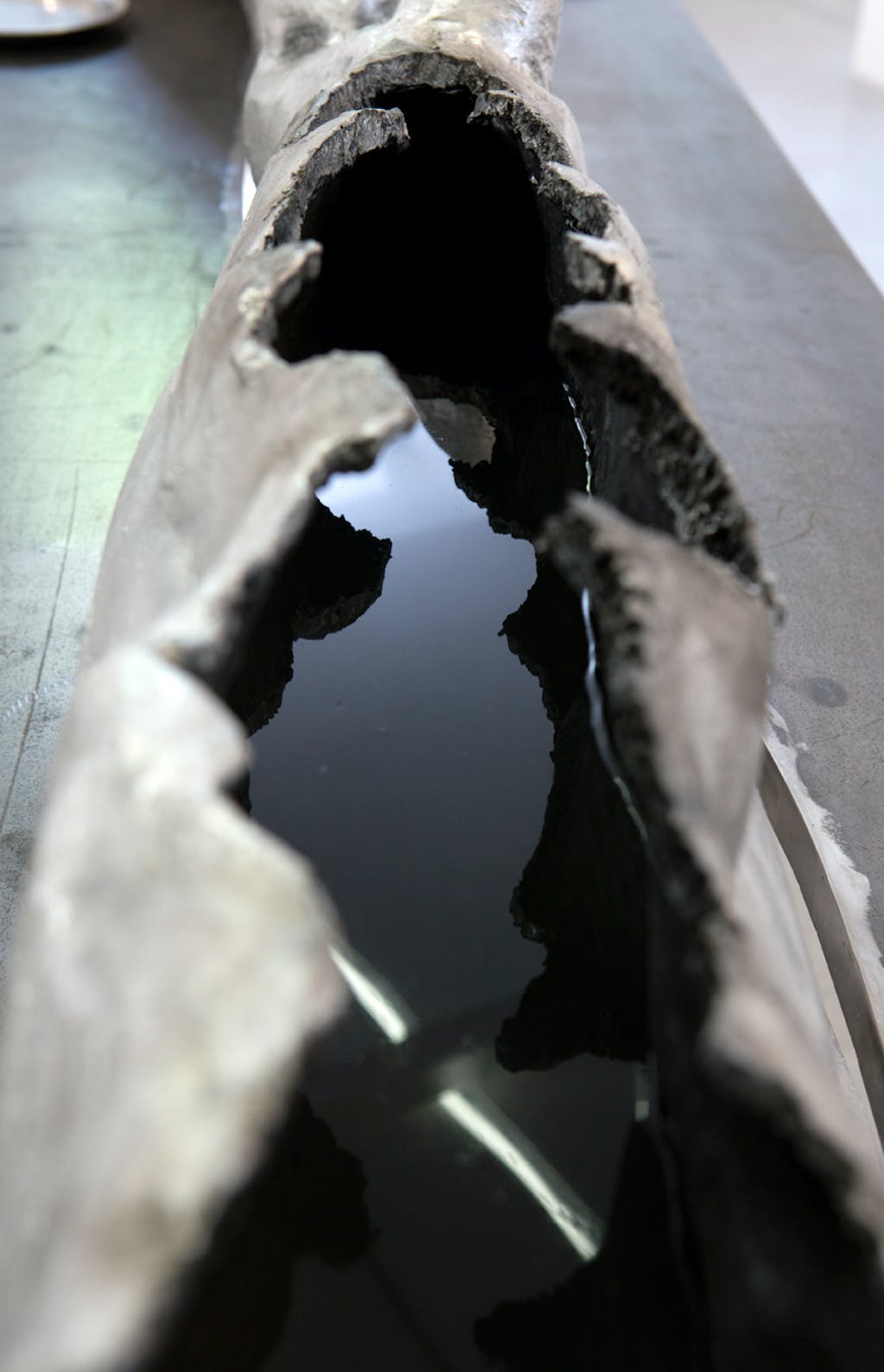 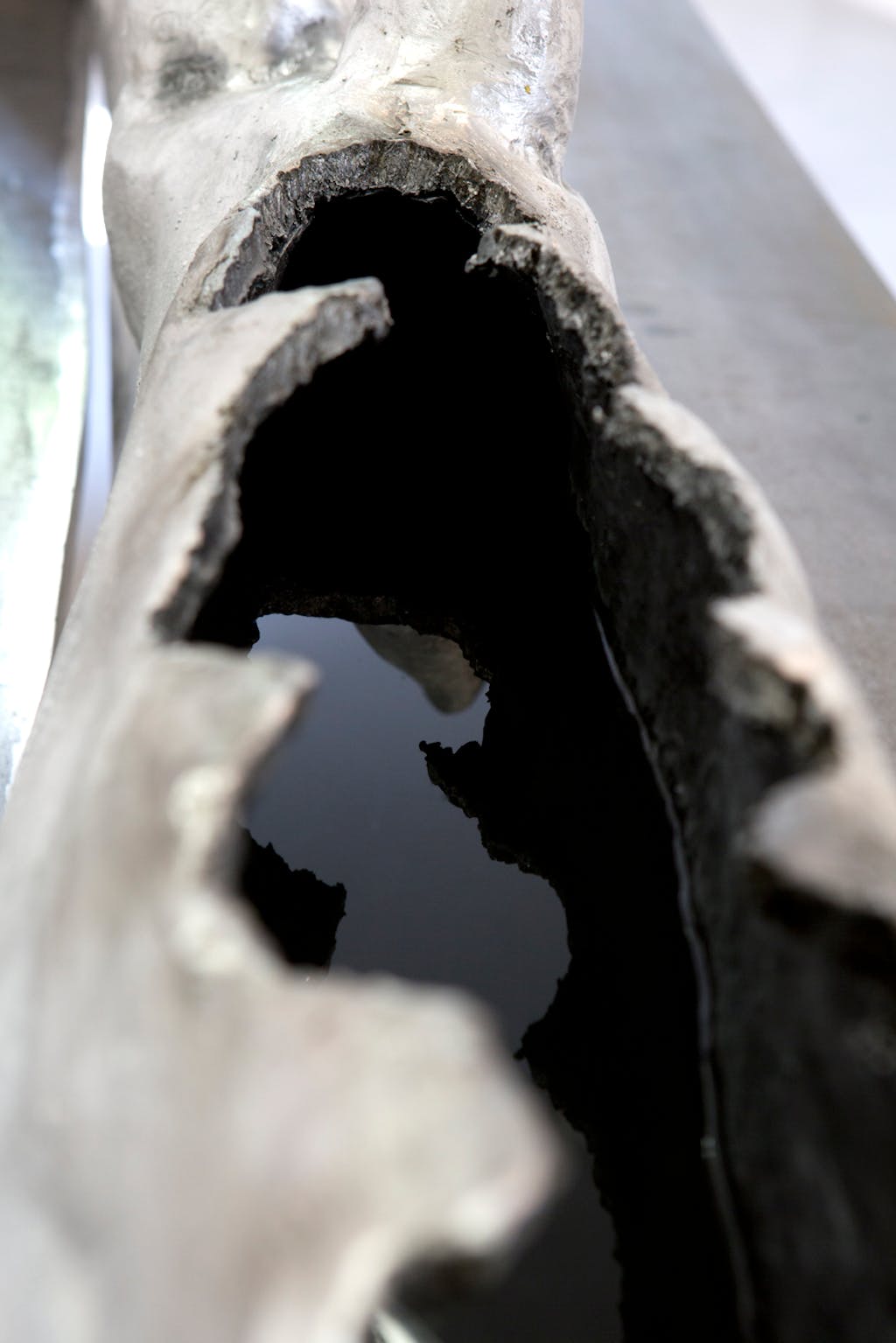 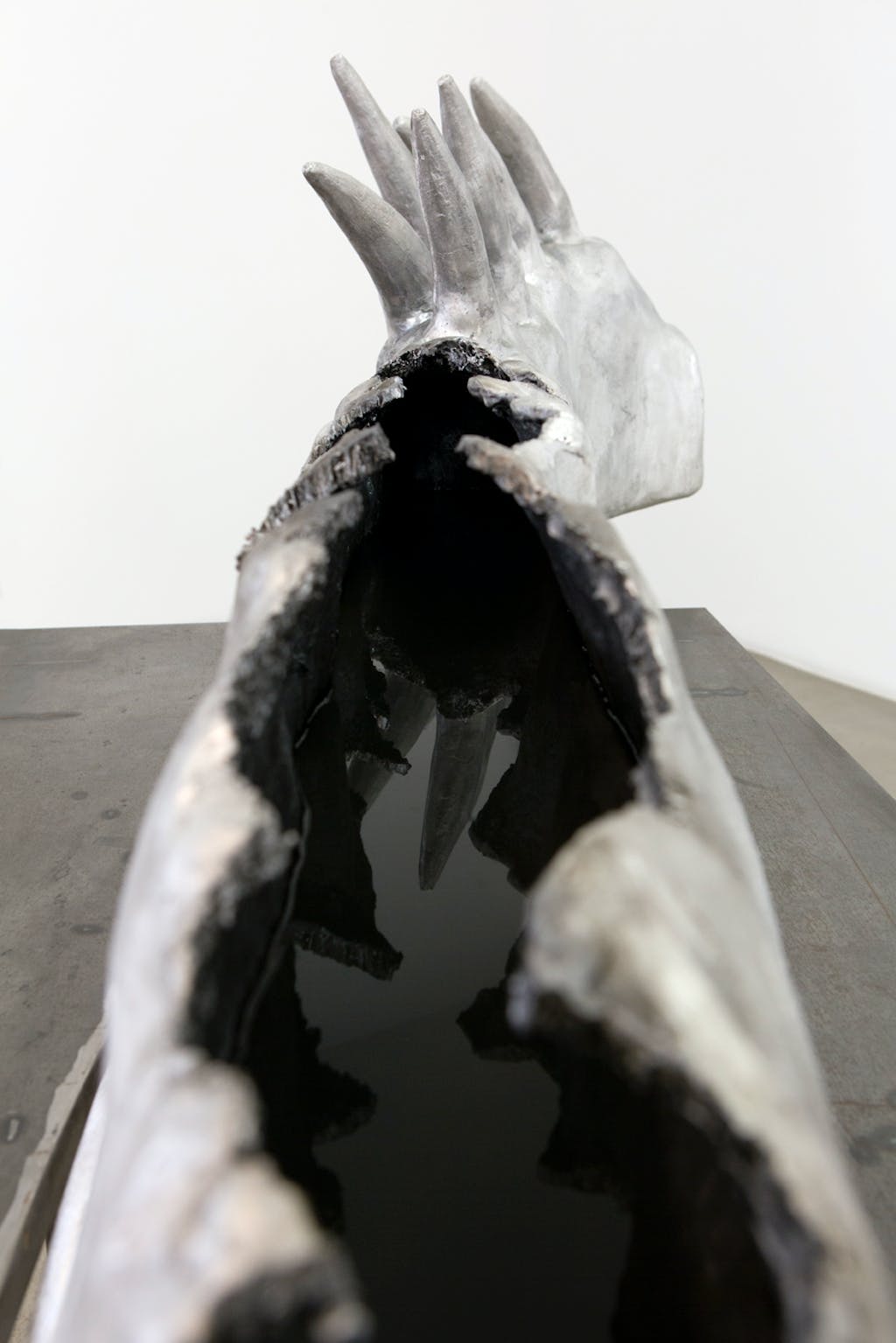