Marble, rock, granite, and graphite are the materials and colors of Daniel Buren’s fourth exhibition at galerie kamel mennour. “Bit by Bit: In Situ and Situated Works” is the title of this latest showing by the French artist known around the world for his poetic interpretations and architectural subversions – be they ephemeral or enduring – of places both public and private, from the Pompidou Centre in Paris to the Guggenheim in New York, and more generally from Europe and North America to South America, by way of Guadalajara and Mexico, as well as Africa and Asia.
With “Bit by Bit: In Situ and Situated Works”, Daniel Buren assesses, surveys, and gives geometrical form to a site – the space on the rue du Pont de Lodi where he showed in 1983. The gallery space at that time belonged to Eric Fabre and the show was entitled “Auparavant” [Back Then], now the subject of a conspiratorial wink, an “opening” in the window of the galerie kamel mennour, the form of which has not changed.
This encounter between past and present draws our attention to the spatiotemporal sweep of Daniel Buren’s work, which has touched us and transformed the perception we have of art, space, and our environment over the past fifty years. The constancy of his “visual tool” (the famous 8.7cm alternating stripes) enables the audacity of his ever-changing originality.
Every site to which Daniel Buren turns his artistic gaze is opened to unprecedented perspectives, reoriented by playful diffraction, and amplified by luminous projections… He makes us lose the compass of the commonplace, he awakens our curiosity and inventiveness by disturbing habits and blindnesses. Because the world has need of us, it is not determined once and for all – it moves between signs and forces, it limits itself, starts anew, breathes… And art is the beating heart of this infinite recomposition. As the philosopher Maurice Merleau- Ponty wrote, “the language of painting is never […] ‘instituted by nature’; it must be made and remade. The perspective of the Renaissance is no infallible ‘gimmick.’
It only one particular case, a date, a moment in a poetic information of the world 1
which continues after it.”
The foundation of Daniel Buren’s artistic approach is expressed and implemented by the phrase “in situ”: “To my mind, it means that there is a purposefully accepted connection between the venue and the ‘work’ that is made, occurs, and
is exhibited there. This is true of all my work without exception, here and 2
elsewhere, since 1965.”
In other words, in situ is a commitment made by the entirety of Daniel Buren’s body of work to the here and now, which are very particular words, as they are dependent on the context in which they are pronounced to derive meaning. This artistic stance is of great import. It evades the most persistent and the most prestigious preconceptions. Thus Daniel Buren’s 1971 work at the Guggenheim Museum in New York made a profound impact on the history of art. Participating in the “Guggenheim International” group exhibition, he hung a twenty meter long, ten meter wide blue and white striped banner in the center of Frank Lloyd Wright’s spiral structure. This subversion of the space caused American artists Dan Flavin and Donald Judd in particular to protest that the banner be banned, claiming that their works were compromised in contact with this “Peinture- Sculpture. Work In Situ”… In 2005, Buren was invited back to the famous New York museum for a three-month solo show occupying the entire space (“The Eye of the Storm: Works In Situ by Daniel Buren”). Among other works, he built two 30-meter-tall walls joined at a right angle and covered in mirrors animated by the play of light from the rose window skylight, whose every other panel was covered with transparent magenta filters.
In situ is an artistic choice, but it is also an ethical one. It promotes a rigorous relationship between the artist and the world. The work is no longer subjected to the external world, but foregrounds the intimate creative imagination and the exploration of fresh perspectives. As such, the fixed work gives way to the work in process, which reinvents the space rather than being overshadowed by it. Obsolete arrangements are challenged to be measured in new light; perception rediscovers its powers of transformation. Daniel Buren’s in situ contributes to the reinvention of the world.
Annabelle Gugnon
_ 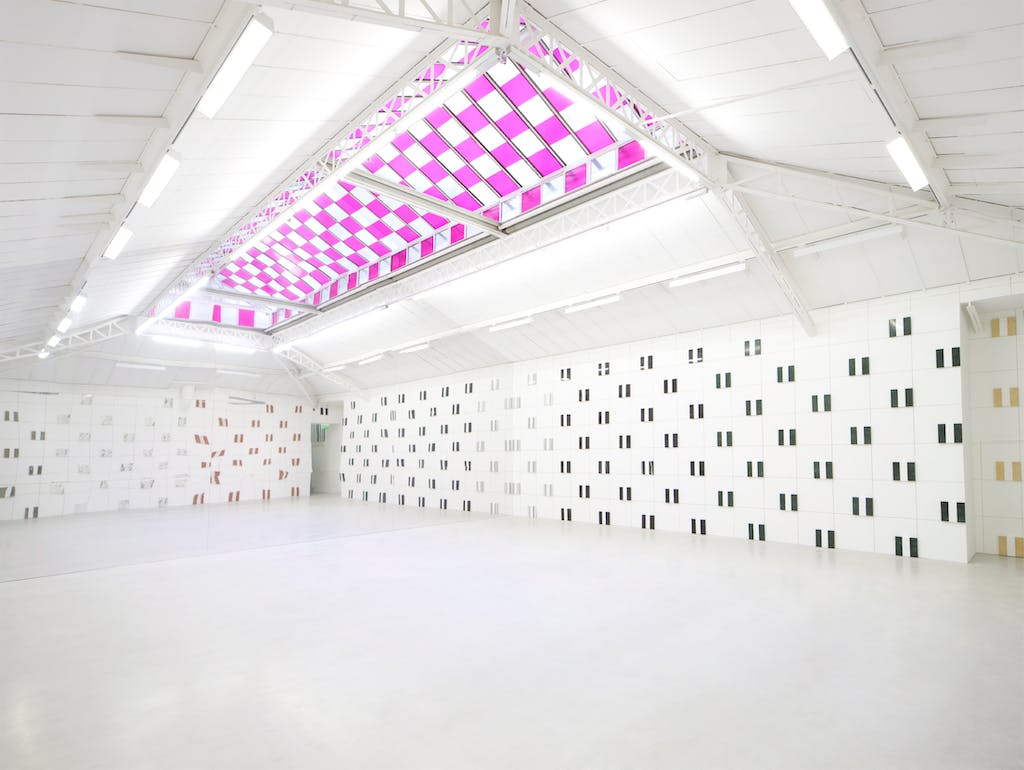 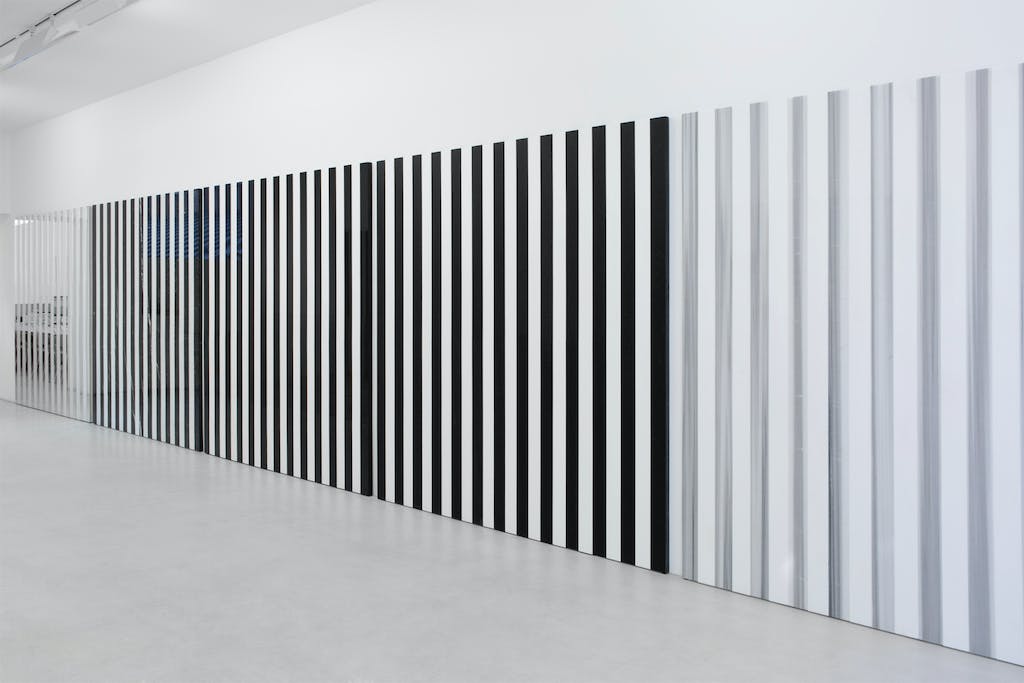 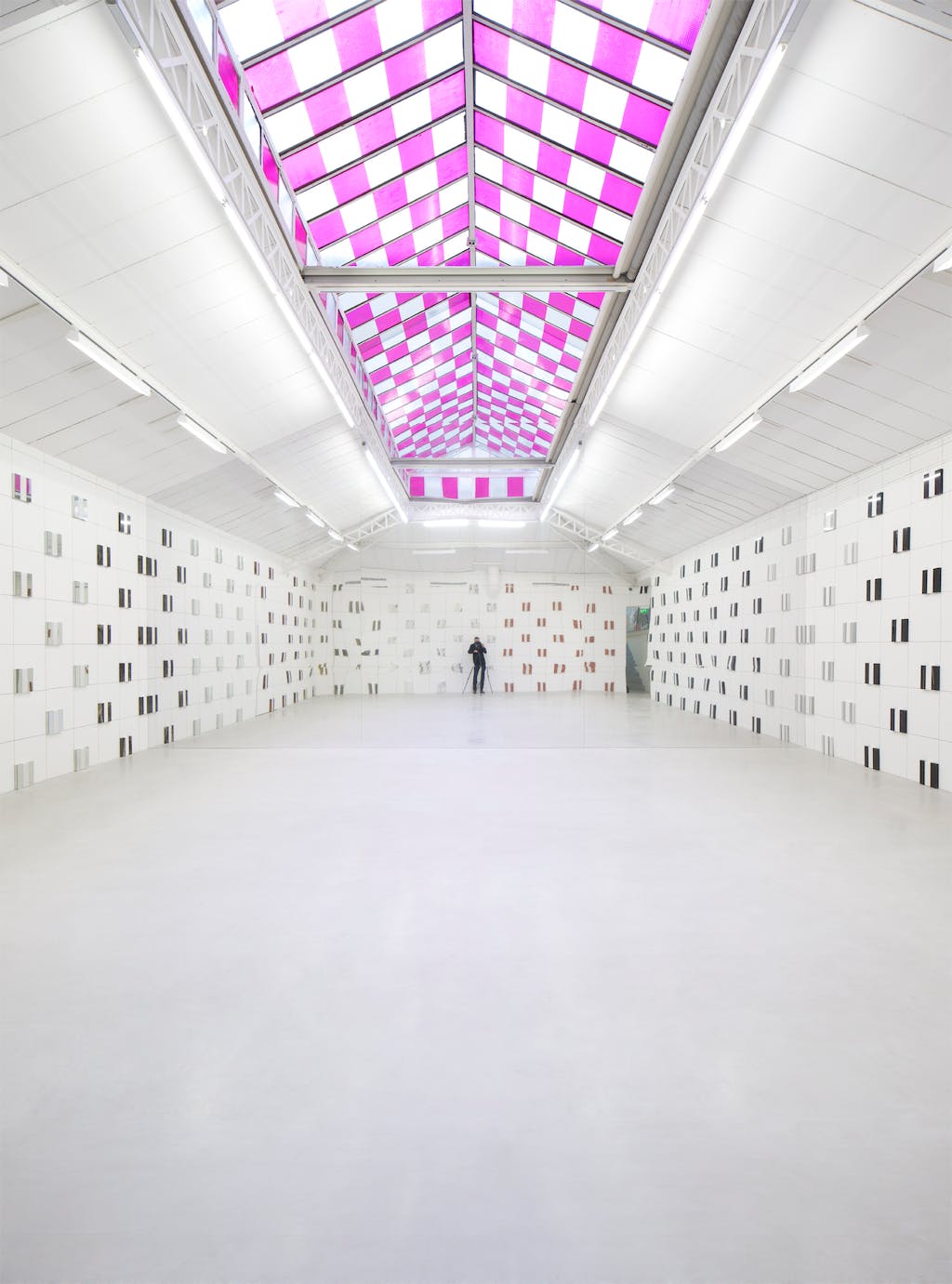 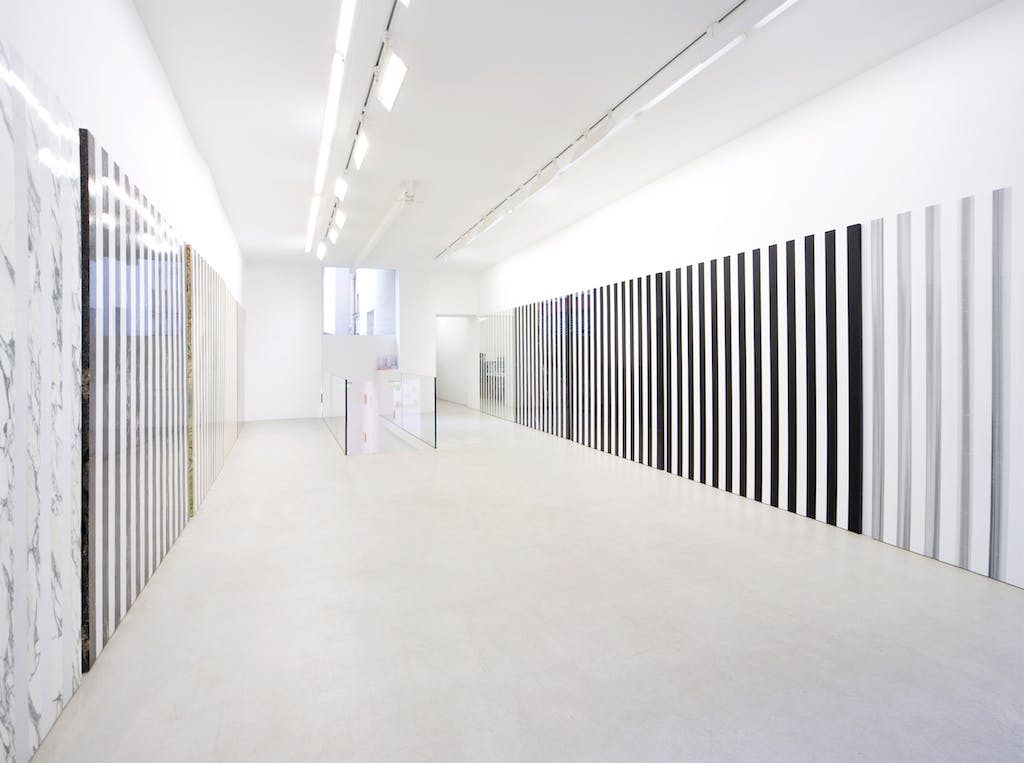 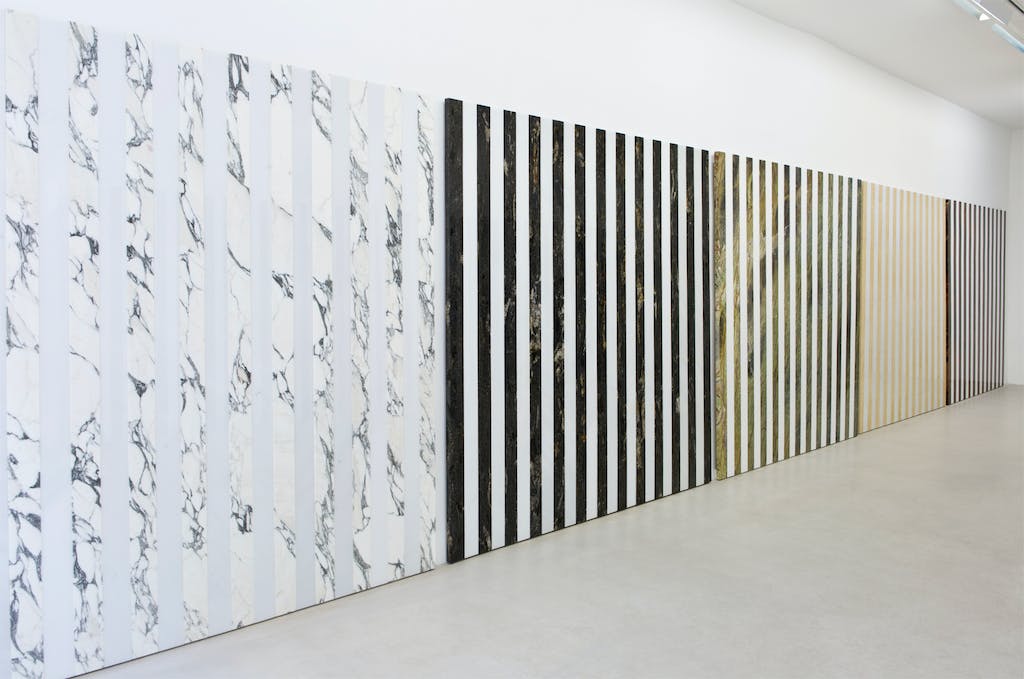 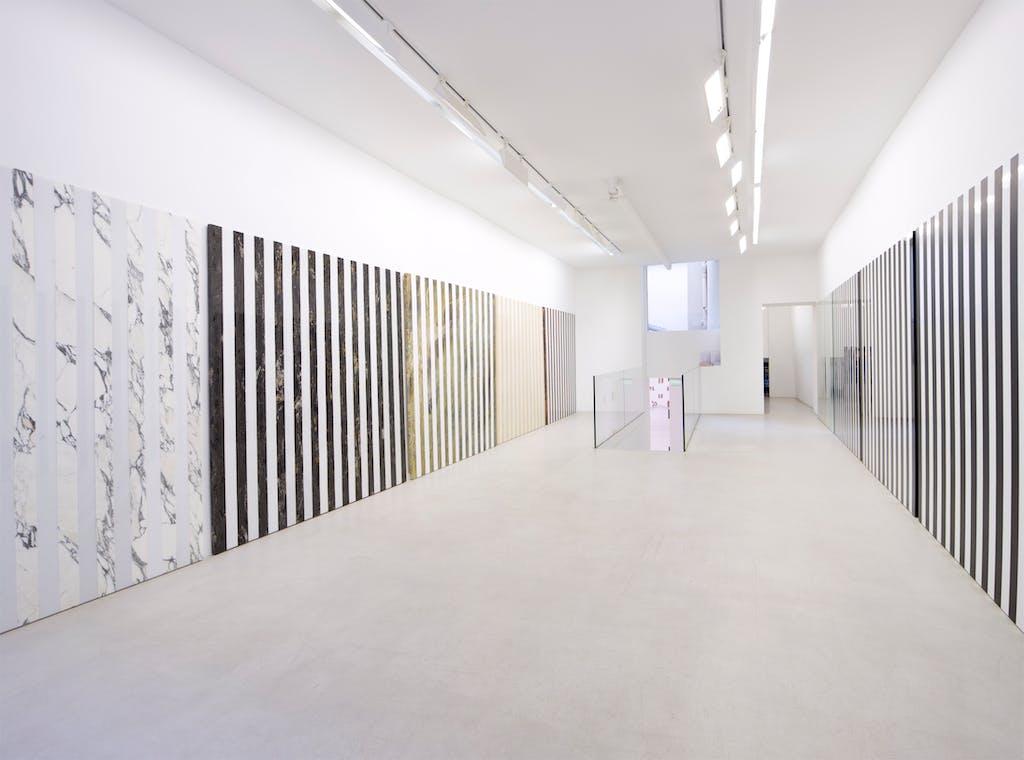 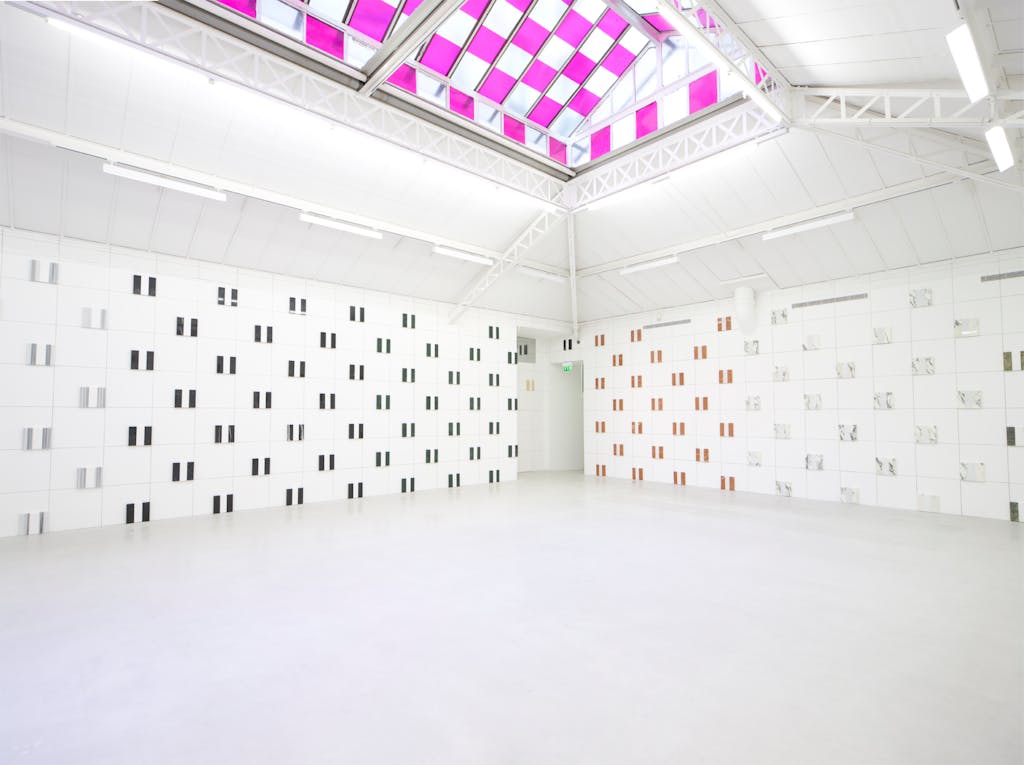 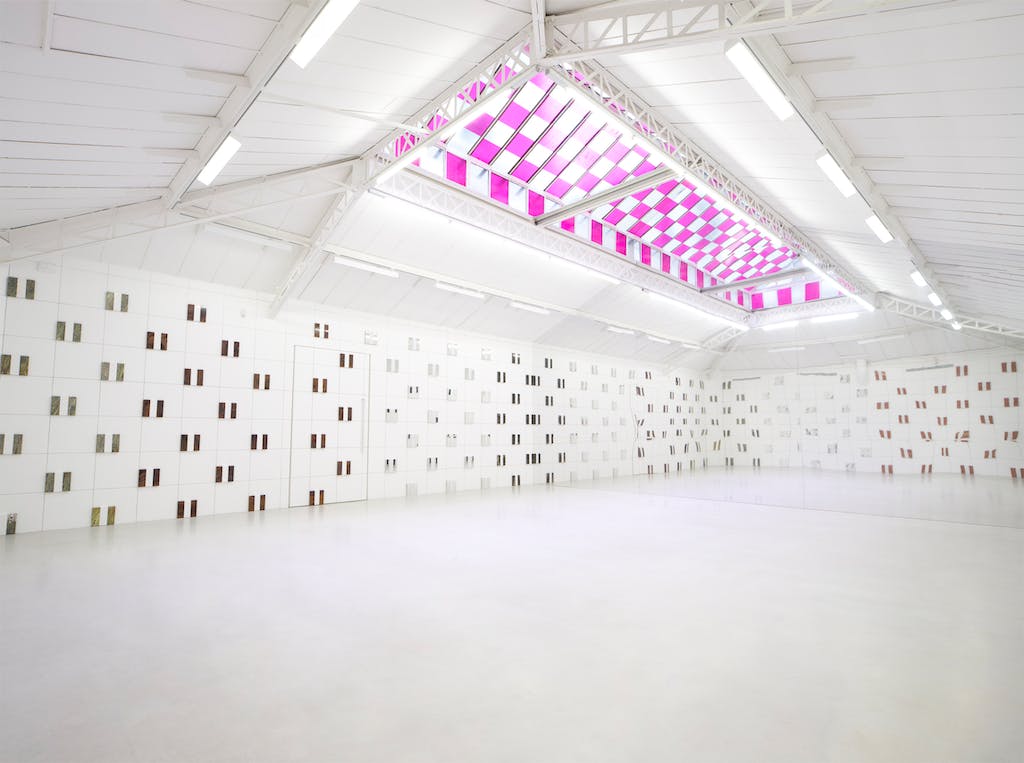 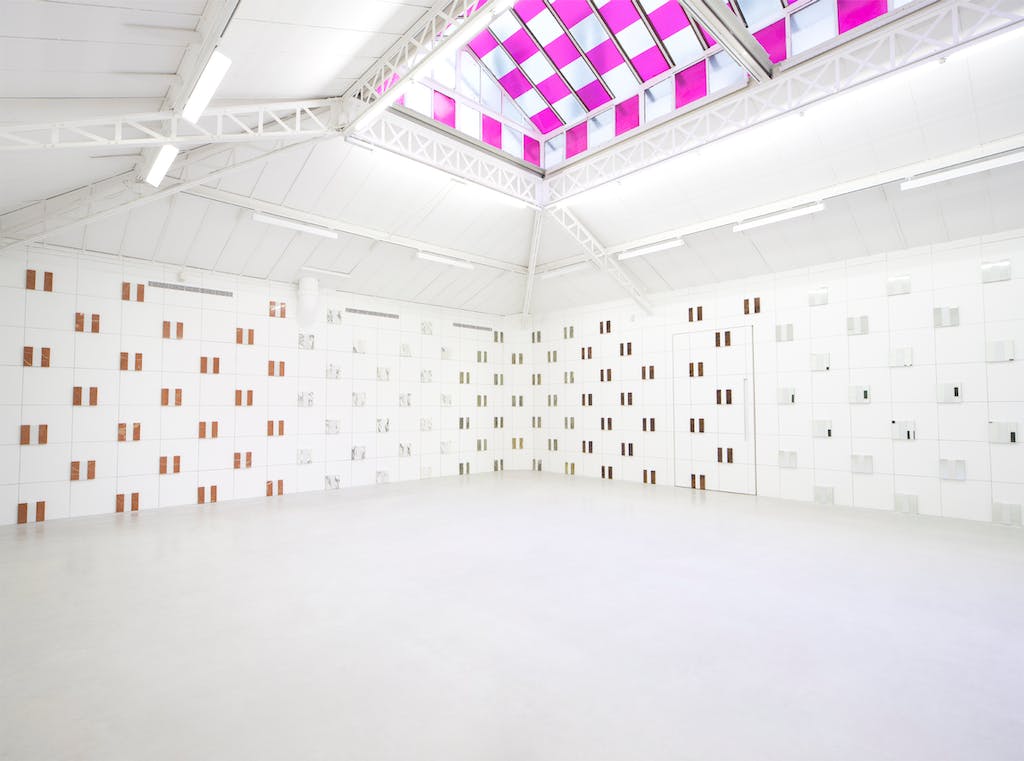 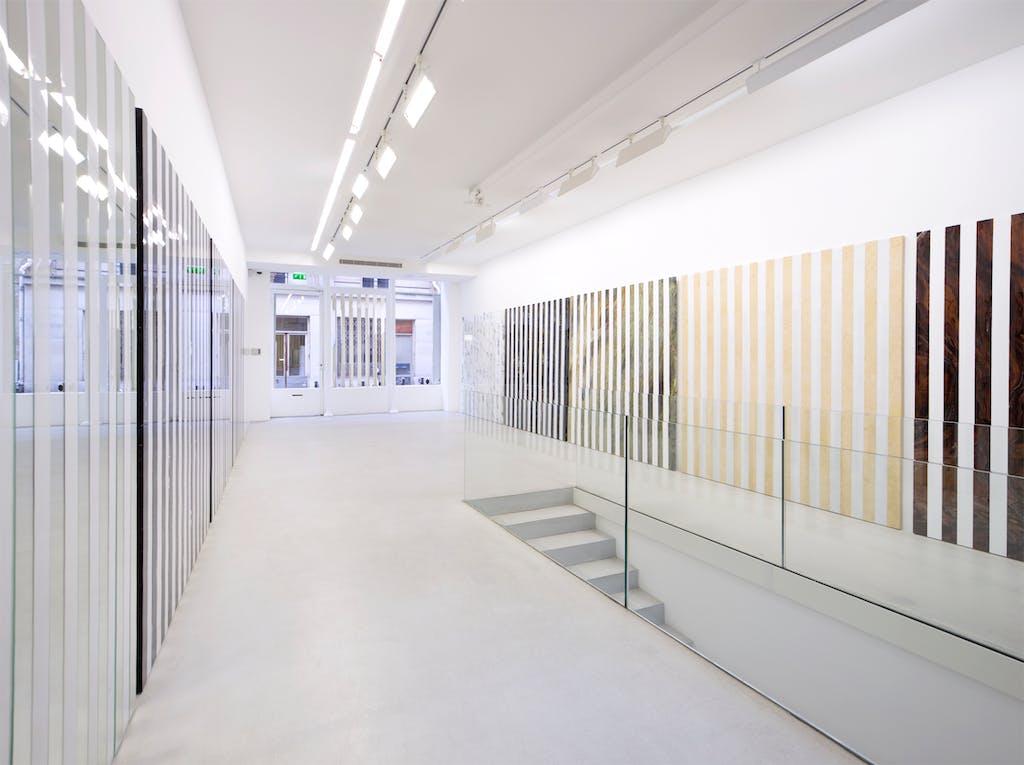