At the outset of Matthew Lutz-Kinoy’s first exhibition at the gallery kamel mennour, there is the living memory of a journey between the East and the West: the imaginary of Tangier fixed in the ethereal reveries of American writers and artists who escaped their lives to colonize the city’s places, objects and bodies.

‘Still today, the image of Tangier remains more or less unchanged. People have not ceased to come here, dreaming of diving into the 1940s atmosphere of excess and prodigality. They sometimes even pretend that the dream has turned into reality’, wrote Paul Bowles at the end of his life. With a cruel irony, he most accurately described the cultured elite’s fascination with Orientalism.

The exhibition in part reflects and outlines the lives of Jane and Paul Bowles. A diabolical and nomadic couple, a homosexual couple that wandered Tangier’s inter-zones, as a pair as well as separately, drawn by the traffic of lovers and drugs, pallid predators roaming the labyrinthine alleys of the white city. Only lovers left alive… They are indeed depicted in the exhibition’s paintings: Paul in an obscene Balthus-like posture and Jane as a tortured elf, drawn in a naturalist fashion that resurfaces her tragic and grotesque destiny.

The exhibition finds its origins in the exotic visions of a border-city – a paradise, a mirage, a place of decadence, loss and possession. The show additionally intercepts the light’s muted and turbulent energy, the color’s vibration, and the power of animal representation. Matthew Lutz-Kinoy’s beasts join Géricault’s great mythical figures, his flying horses, and Delacroix’s big cats. Shapes whose representations of morphology, movement and violence are reinforced by the nervous intensity of pure colors.

These oriental sensations allow Matthew Lutz-Kinoy to introduce a multitude of details, figures and ornaments; their coloration, platitude and brilliance alternatively pacify or excite the painting’s parts. Like poetic and poisonous flowers, born from an urge to paint that seems infinite. There are no real-life models corresponding to these exuberant flowers, neither carnations nor peonies. They are impressions of an invented vegetation, of the idea of a garden or a chromatic surface, the notion of red as a unique horizon.

From the image of the Bowles couple to the ones painted on the surface of the bowls (the large ceramic basins filled with water and displayed on the gallery’s floor), Matthew Lutz-Kinoy introduces homonymy or homophony effects – ambiguities between subjects and things, places and times, an indistinct passage between referents and signifiers – into the exhibition’s language.

In Matthew Lutz-Kinoy’s work, ceramics holds a very special place. The basins – inspired by Hispano-Moorish earthenware and characterized by their tin-based enamel, by green hues and manganese, by the blue and white decors – compose a mobile garden, a reflecting landscape that interacts with the paintings’ floating structures as well as with the gallery’s architecture.

Throughout this totalizing display, solely made of new works, one rediscovers the internal logic already found in the artist’s previous shows: the aim to confine outdoor spaces, different eras of time and epochs, forms and tastes, within an enclosed space. The intention to form a space bearing all the eras of time, a space outside of time which would nonetheless function as the space of our modernity. 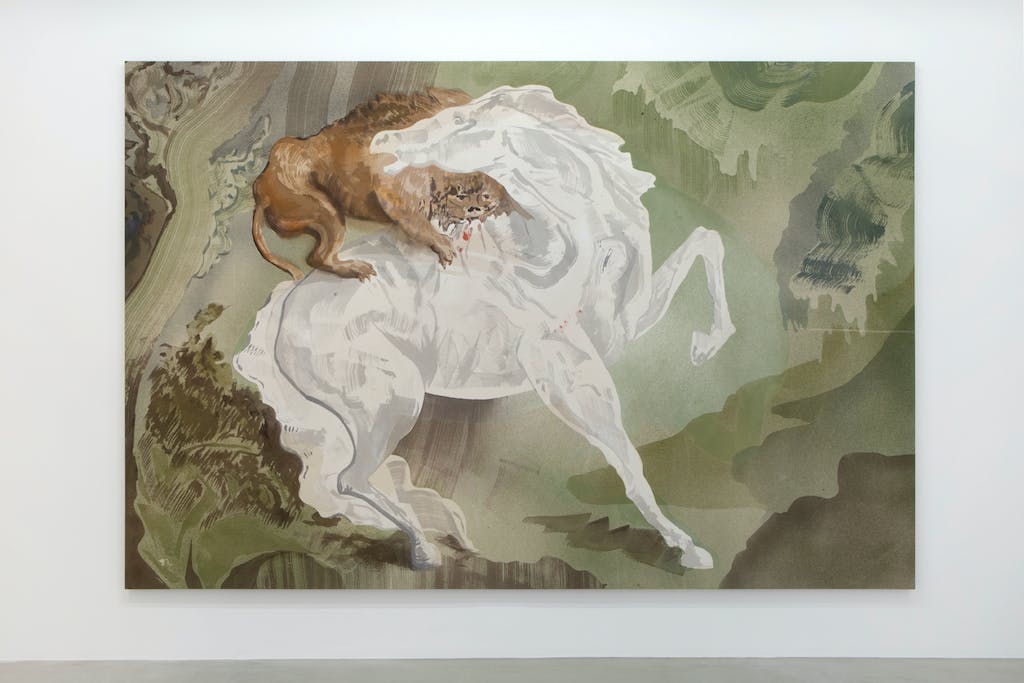 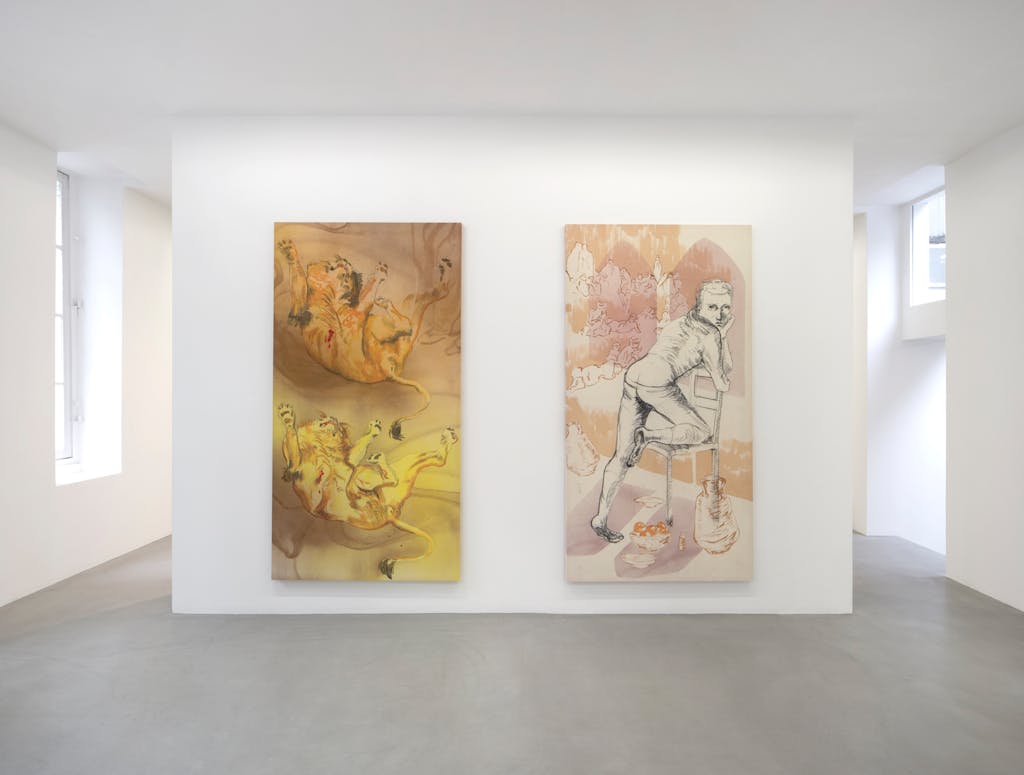 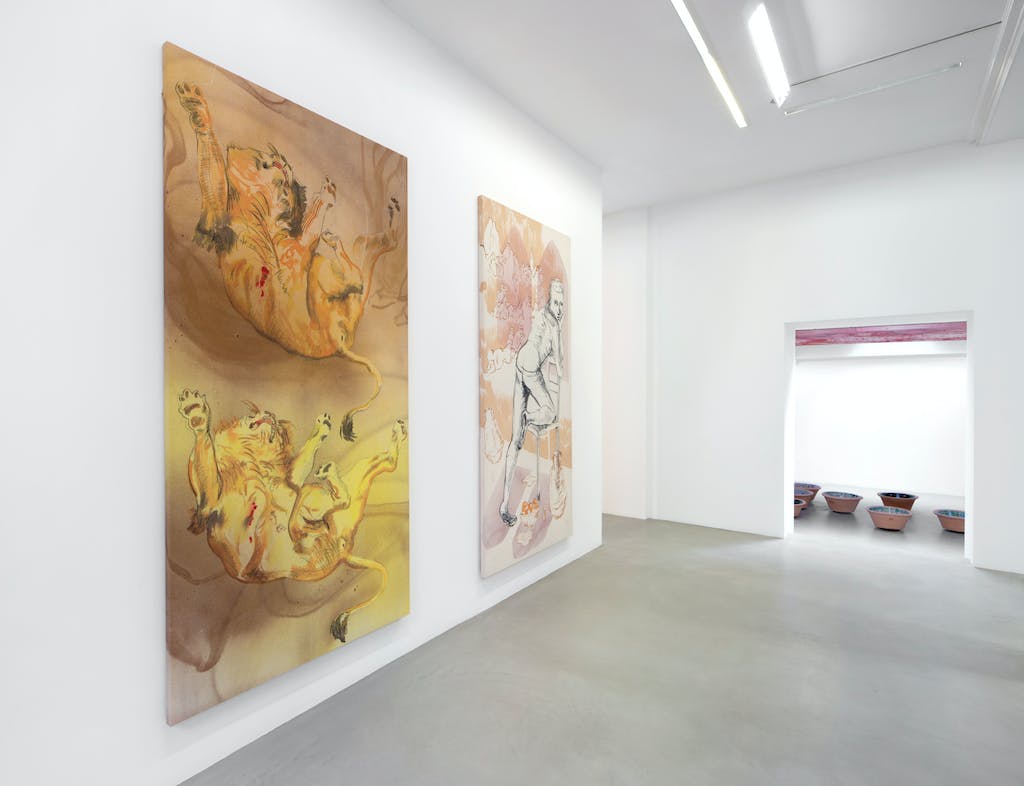 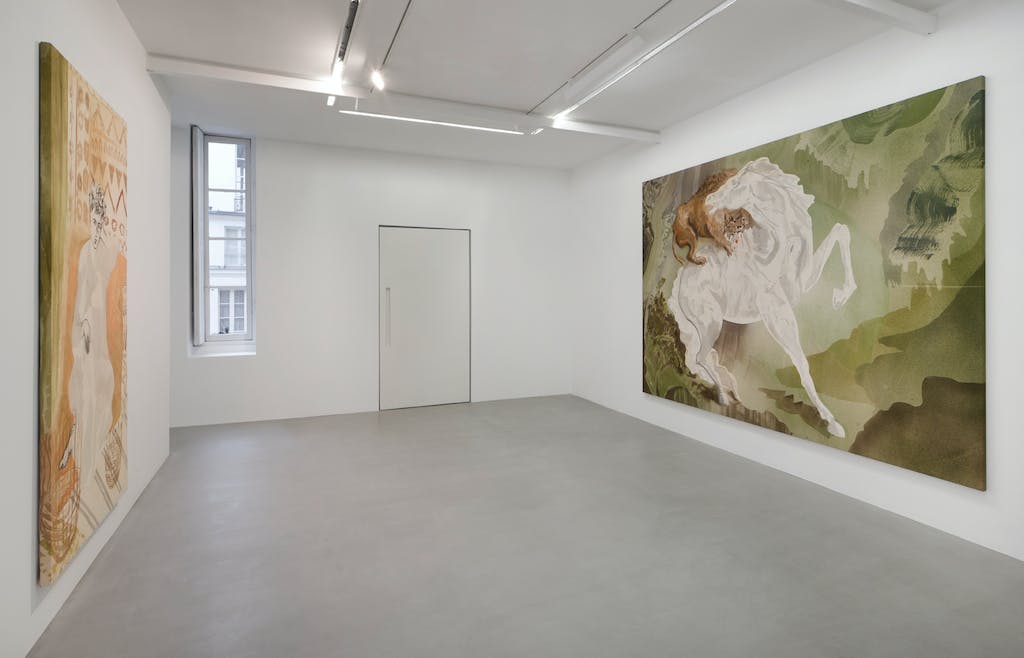 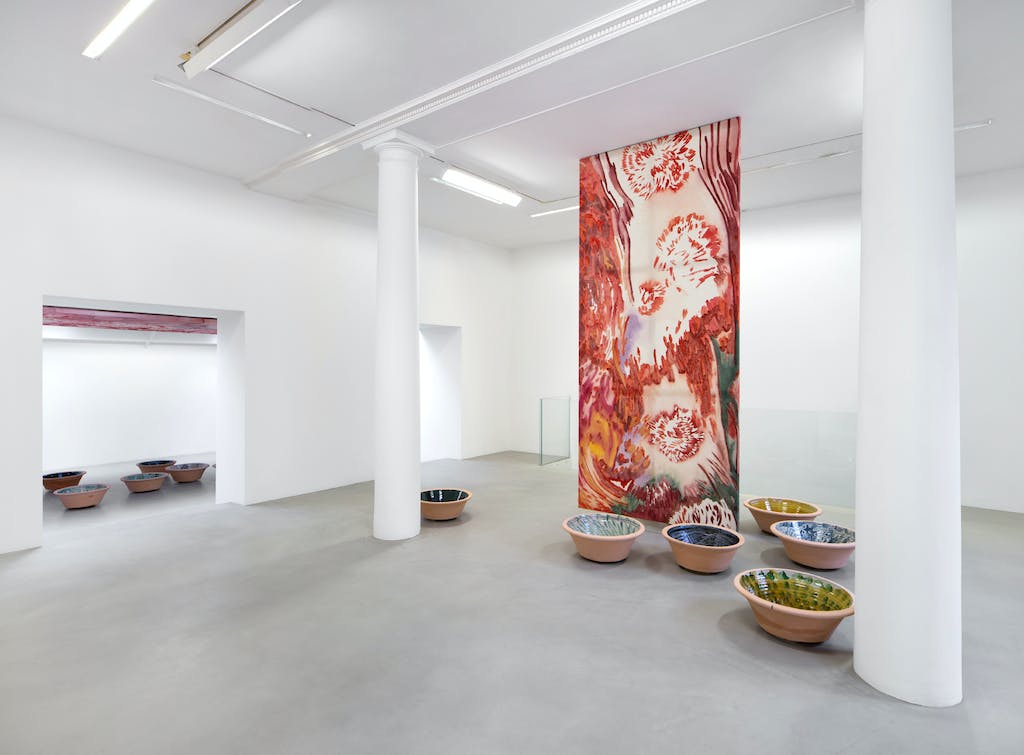 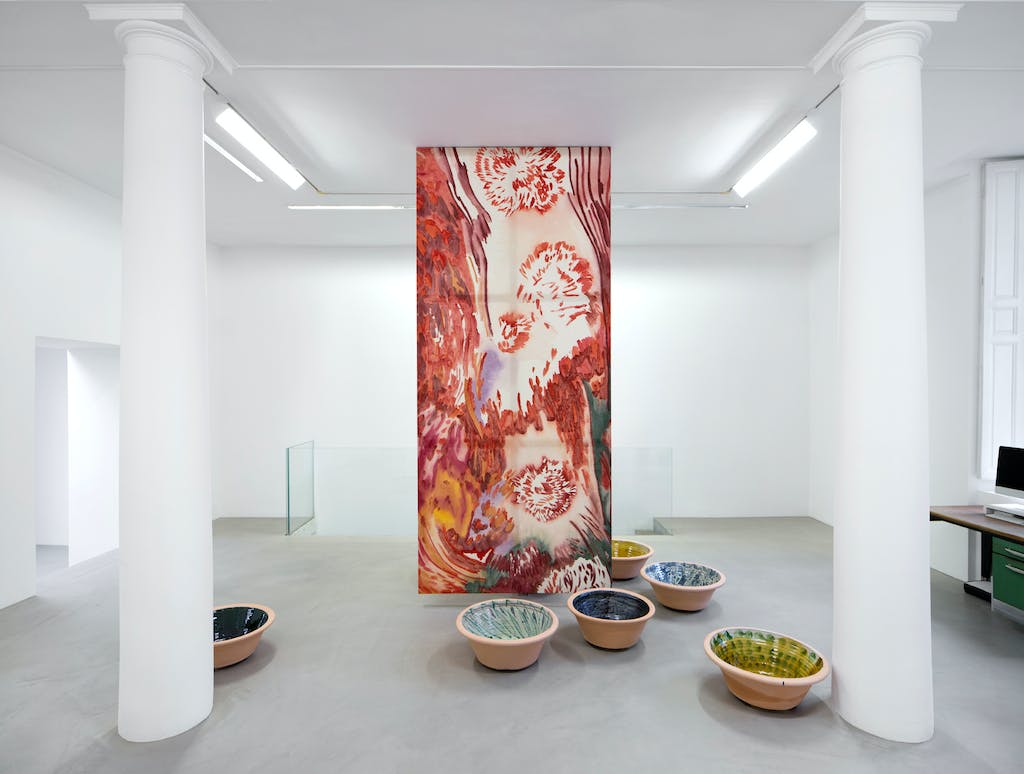 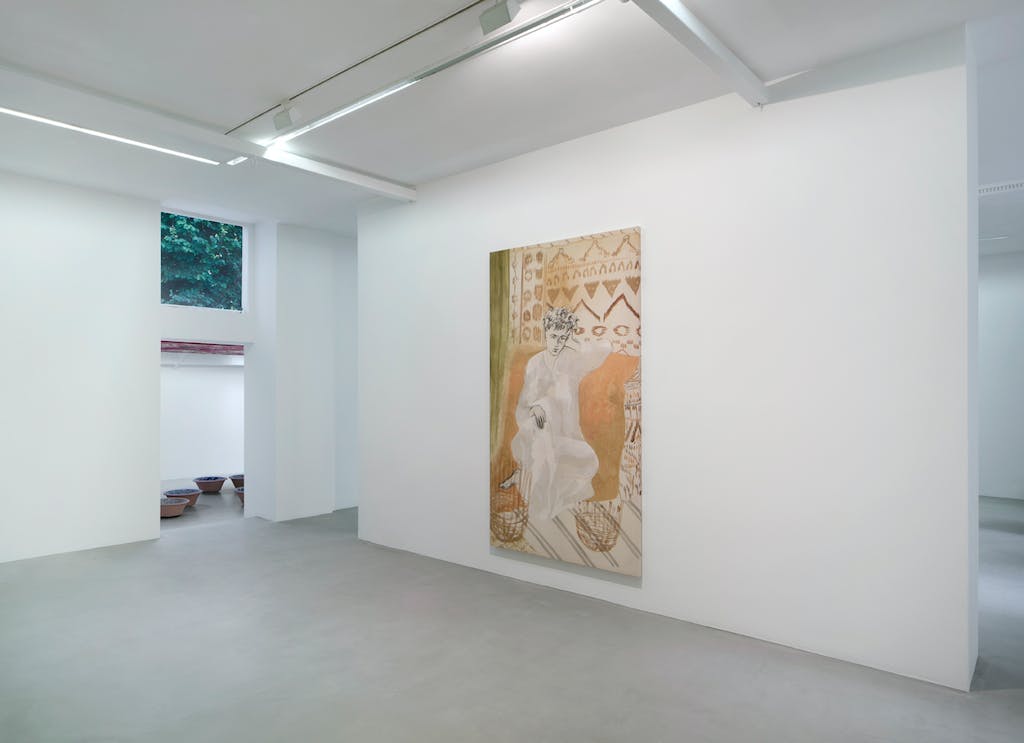 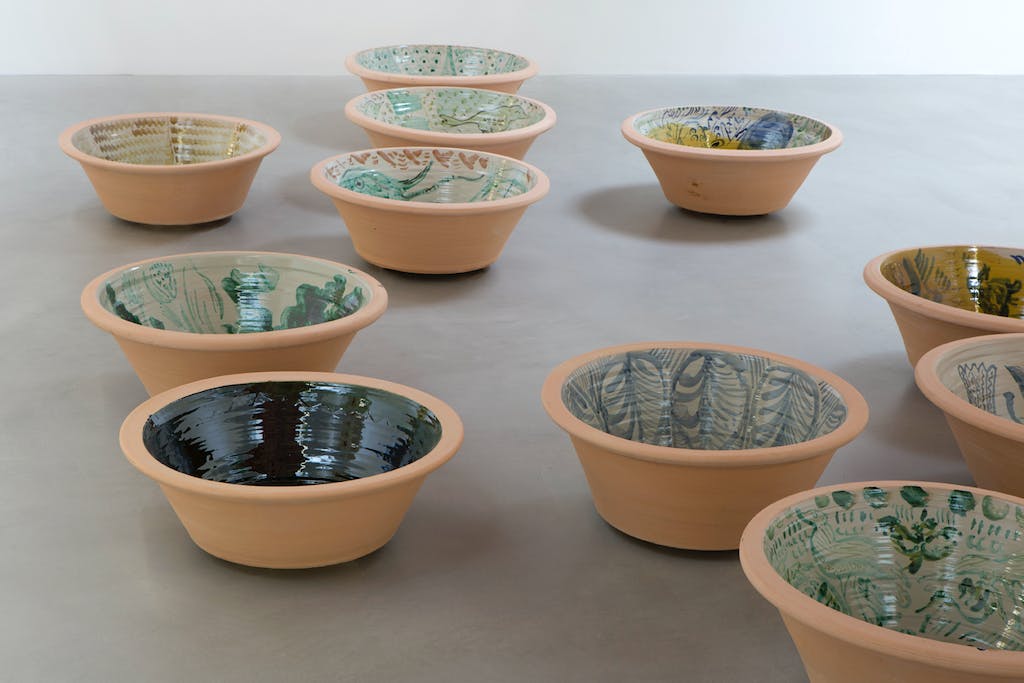 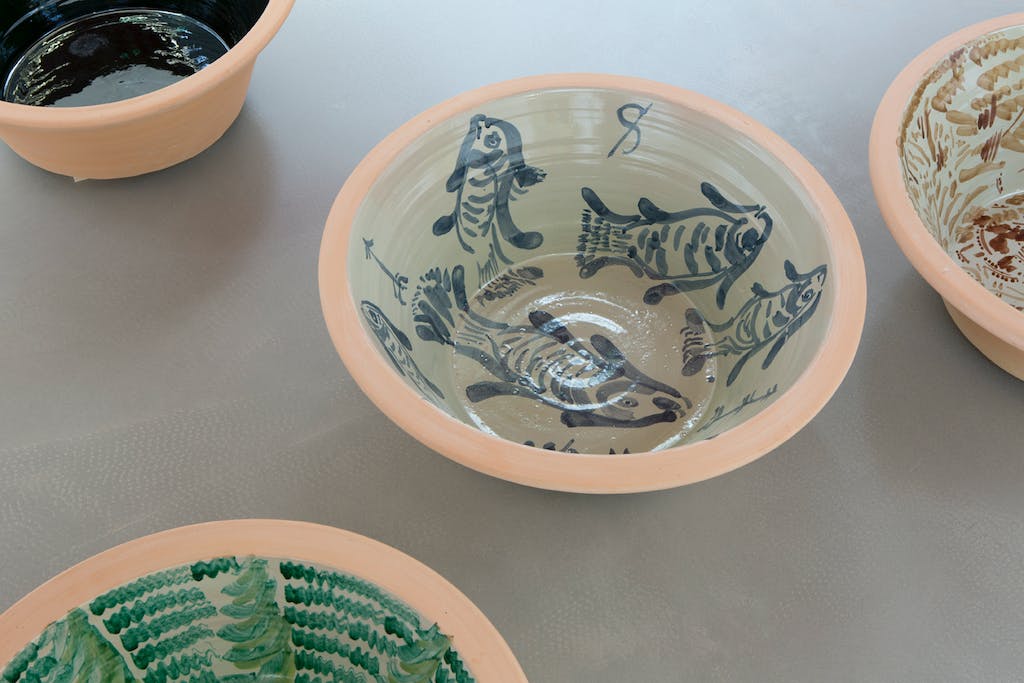 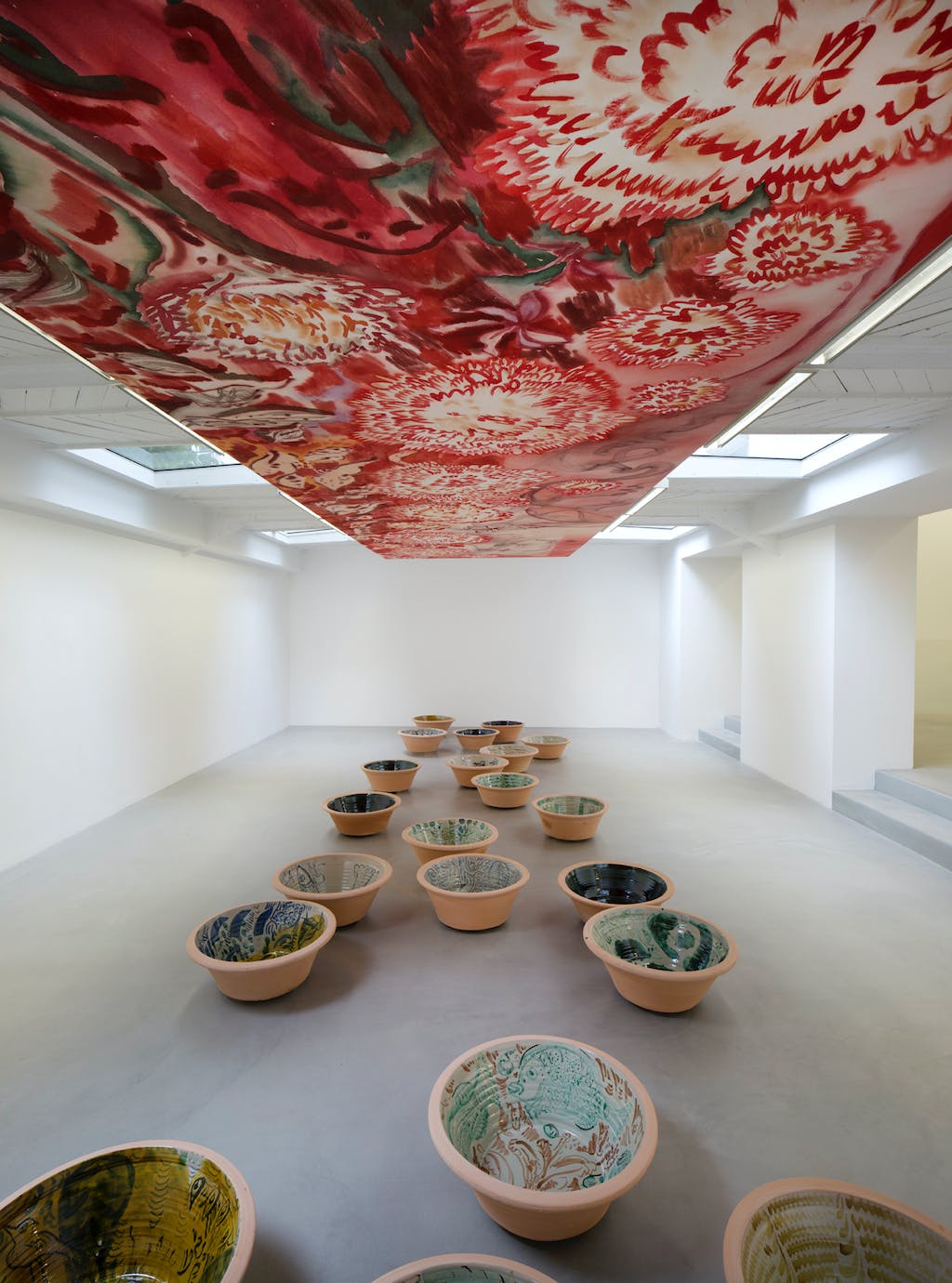 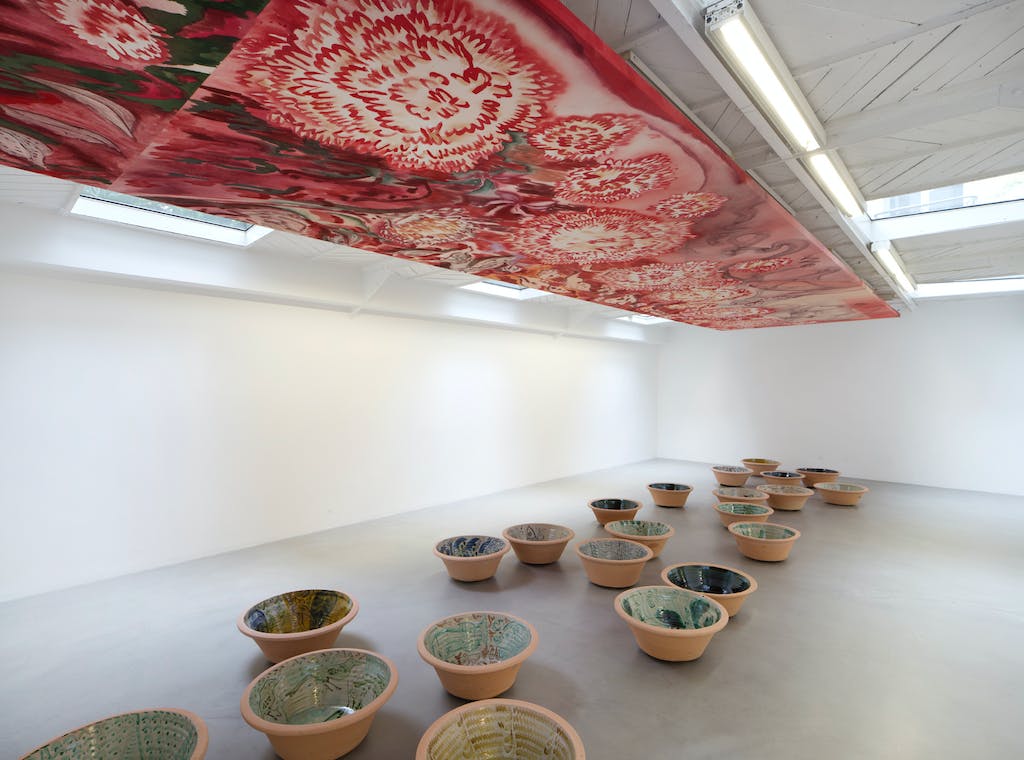