Born in 1936 in Golfe-Juan (France), MARTIAL RAYSSE lives and works in Issigeac (France). For Martial Raysse, the work’s space is one of experimentation. He combines techniques and mediums, embedding neon lights in the canvas (High Tension, 1964) and placing his works on artificial beaches (À propos de New York en peinturama, 1964). At the end of the 1960s, the arrival of video enabled him to make offbeat and parodic films such as Portrait Electro, Machin Chose (1967) and Le Grand Départ (1972). Although these aspects of his work correlate him with the Fluxus movement, his work is always cheerful and playful. A filmmaker, painter, and sculptor, he believes in the therapeutic dimension of art and makes the choice of color, volume, and drawing. Having traversed the artistic currents of the second half of the 20th century, his work is fully situated in the present. Kamel Mennour and Martial Raysse have been working together since 2015.

He studied literature and then, without losing his acute interest for language, turned toward painting at the end of the 1950s, enrolling in the School of Decorative Arts in Nice. Around this time, he grew closer to the New Realists, with whom he shared the practice of reappropriation. Although he was assembling everyday objects, Raysse distanced himself from the group beginning in 1963 by deciding to use only new objects. His work takes inspiration from childhood as well as from the female body and its accessories (mirror, suntan lotion, lipstick, etc.). Fascinated by consumer society, which had a kind of museum in the store Prisunic, he found the joie de vivre characteristic of his work in promotional displays and advertising imagery. In 1999, though, he withdrew from the art market for several years, rejecting it and beginning an extensive dialogue with art history that would result in very large frescoes which, while referring to the lessons of the old European masters, are resolutely contemporary. 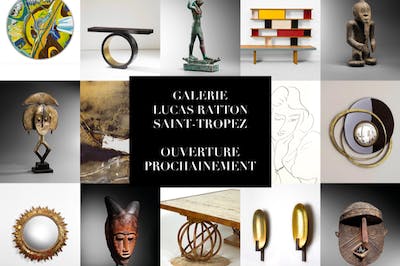