Born in 1966 in Glasgow (Scotland), DOUGLAS GORDON lives and works in Berlin (Germany), Glasgow (Scotland) and Paris (France). Douglas Gordon’s practice encompasses video and film, installation, sculpture, photography, and text. Through his work, Gordon investigates human conditions like memory and the passage of time, as well as universal dualities such as life and death, good and evil, right and wrong. Kamel Mennour and Douglas Gordon have been working together since 2018.

Gordon’s œuvre has been exhibited globally, in major solo exhibitions including the Neue Nationalgalerie Berlin (1999), the Tate Liverpool (2000), the MOCA in Los Angeles (2001 and 2012), the Hayward Gallery in London (2002), the National Gallery of Scotland (2006), the Museum of Modern Art in New York (2006), the TATE Britain in London (2010), the Tel Aviv Museum of Art (2013), as well as in the Musée d’Art moderne de la Ville de Paris (2014).
His film works have been invited to the Festival de Cannes, Toronto International Film Festival (TIFF), Venice Film Festival, Edinburgh International Film Festival, BFI London Film Festival, Festival del Film Locarno, New York Film Festival, among many others.
Gordon received the 1996 Turner Prize. In 2017, he presented “I had nowhere to go” at Documenta 14 in Athens and Kassel.

Self Portrait of You + Me (Multicoloured Elvis with Black and White), 2018 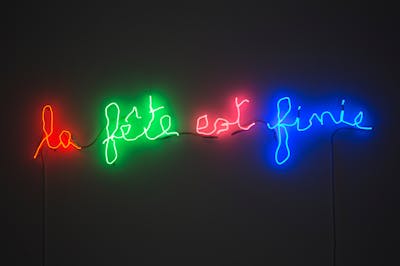