CHRISTIAN DE PORTZAMPARC is a leading French architect and urban planner, who was awarded the Pritzker Architecture Prize in 1994 and at the age of 50 as the first French winner. In 2006, the “Collège de France” created a 53rd chair dedicated to “artistic creation.” Christian de Portzamparc was its first holder. He received the 2018 Praemium Imperiale Arts Award for Architecture by the Japan Art Association.
His imaginative architectural style is known for its distinctive features such as bold designs, an artistic approach and the creativity that comes from drawing and colour. He is especially esteemed as a designer of concert halls and an urban planner. He studied architecture in Paris and New York, and became famous for his creation of the rue des Hautes Formes dwellings in Paris and the large scale project for President François Mitterrand called La Cité de la Musique (1995), which involved creating music halls of different sizes, a music museum and many dwelling places.
His important works include: Nexus II (1991), a residential complex in Fukuoka/Japan; the LVMH Tower in New York/USA (1991); the Philharmonie Luxembourg/Luxembourg (2005); the Cidade das Artes, a cultural complex in Rio de Janeiro/Brazil (2013); two skyscrapers in New York/USA, One57 (2014) and Prism Tower (2016); and the Paris La Défense Arena (2017), an indoor stadium and concert hall in Nanterre/France.
He is currently working on large-scale cultural projects such as the Shangyin Opera House in Shanghai/China (just completed in October 2019); the Grand Theater of Casablanca/ Morocco, the largest Theater of Africa (opening soon); and the Cultural Center and Opera House of
Suzhou/China (October 2020).
Christian de Portzamparc has always painted and drawn alongside his architectural projects. For him, it is a pure experience of space, pure because freed from the weight of material construction or installation. It is here that the architect’s ideas and obsessions become pictorial facts.
This is is the system of descriptive geometry invented by Gaspard Monge at the time of the Industrial Revolution. The system makes it possible to project into two dimensions all sorts of machines, objects, buildings, and places, in the same void that Kepler and Galileo found to be infinite, and through which we move.
Here, this system for representing space in two dimensions becomes a pictorial structure.
But the places described in infinite space are only visible if this space is traversed by light encountering matter—the gas particles, walls, dust, and solid objects that it illuminates. It is impossible for us to imagine what constitutes light on an infinitely small scale. Instead light has beensymbolised here by a series of multidirectional networks that appear to be in movement. They have come from the distant time when Christian de Portzamparc would watch closely the phenomena of nocturnal projections and reflections, thinking about the turbulence of the photons that quantum physics presents as both wave and particle, but having no mass… 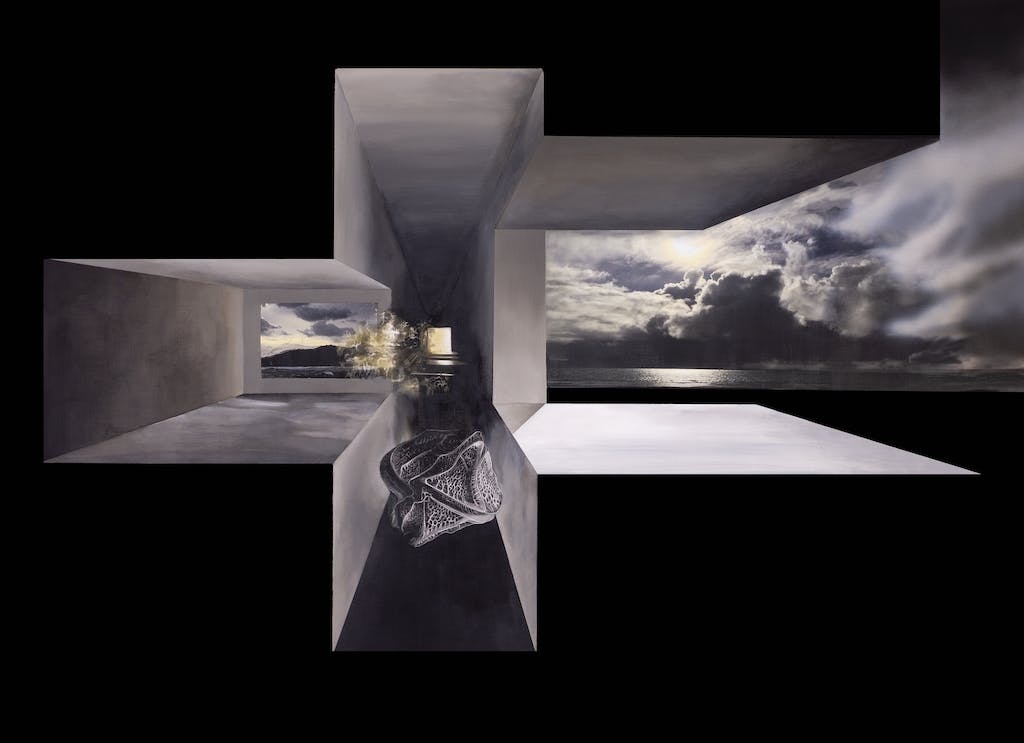 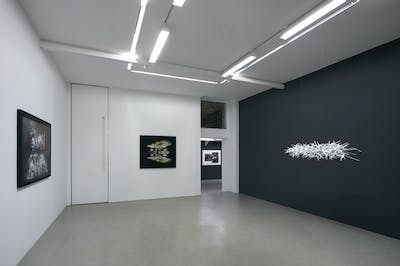