Born in 1978 in Paris (France), CAMILLE HENROT lives and works in New York (United States). The practice of French artist Camille Henrot moves seamlessly between film, painting, drawing, sculpture and installation. The artist references self-help, online second-hand marketplaces, cultural anthropology, literature, psychoanalysis, and social media to question what it means to be at once a private individual and a global subject. Henrot is interested in confronting emotional and political issues, and looking at how ideology, globalization, belief and new media are interacting to create an environment of structural anxiety. The changing modes of information distribution and interpersonal connections, the relationships between individual experiences and macroscopic dynamics, as well as between images and language, are at the center of her works.

A 2013 fellowship at the Smithsonian Institute resulted in her film Grosse Fatigue, for which she was awarded the Silver Lion at the 55th Venice Biennale. She is the recipient of the 2014 Nam June Paik Award and the 2015 Edvard Munch Award. A corresponding exhibition will open at Oslo’s newly opened Munch Museum in fall 2021. She elaborated ideas from Grosse Fatigue to conceive her acclaimed 2014 installation “The Pale Fox” at Chisenhale Gallery in London. The exhibit, which displayed the breadth of her diverse output, went on to travel to institutions including Kunsthal Charlotenburg, Copenhagen; Bétonsalon – Centre for art and research, Paris; and Westfälischer Kunstverein, Münster, Germany. In 2017, Henrot was given carte blanche at Palais de Tokyo in Paris, where she presented the major exhibition “Days Are Dogs.” 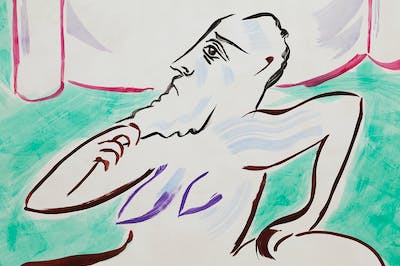